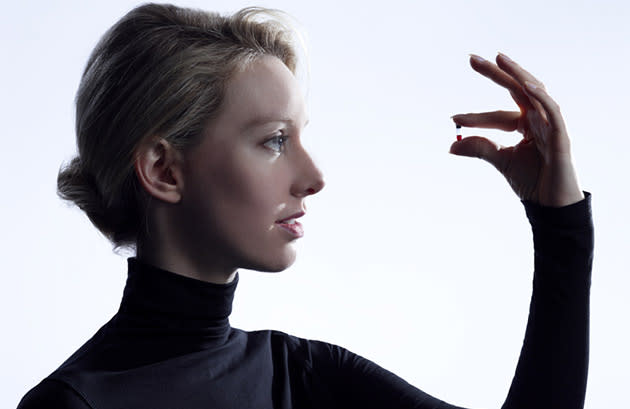 You might still think of Walgreens as a corner drugstore chain, but the company aims to be much more than that. In its quest to become a "healthcare leader," Walgreens recently teamed up with Silicon Valley startup Theranos, which boasts a new and innovative blood testing method developed by founder Elizabeth Holmes (above). In fact, a Walgreens in Palo Alto started offering blood tests from within its premises last year, followed by over 40 stores in Phoenix. Now, according to Walgreens exec Tim Theriault, the company could eventually offer this in-store blood test in locations across the country-- a move that has huge implications, as Theranos' tests are much cheaper, quicker to do and a lot more efficient than its more traditional counterparts.

Holmes, who dropped out of Stanford at 19 years old to build Theranos, devised a way to perform up to 70 different blood tests using just 25 to 50 microliters of blood. The startup seriously needs so little blood from patients, that all it takes to draw a sample is a nearly painless fingerprick. Plus, the minuscule vial it uses to keep blood in is called a "nanotainer," which you can (barely) see in the image above. Even better, the company has vowed to keep its prices (which are fully displayed on its website) below 50 percent of Medicare's reimbursement rate for each procedure. With Theranos testing kits accessible in every more Walgreens, people can just walk in, get their finger pricked, get results to their doctors within hours and save a ton of money in the process.

Walgreens hasn't revealed details for this expansion yet, but seeing as the company wants to be known as a leader in healthcare within five years' time, the rollout might start in the near future. Other than its partnership with the startup, Walgreens is also working on a cloud-based EHR (electronic healthcare record) containing all customers' info that can be accessed across stores, among other projects.

PS: Holmes is pretty secretive when it comes to Theranos' testing process, but you hear her talk about the company below.

Update (11/18/14): Walgreens' spokesperson Michael Polzin reached out and told us the company sees "the potential to offer the Theranos service in locations across the country," but it unfortunately won't be in every store.

In this article: BloodTest, health, medical, medicine, theranos, walgreens
All products recommended by Engadget are selected by our editorial team, independent of our parent company. Some of our stories include affiliate links. If you buy something through one of these links, we may earn an affiliate commission.