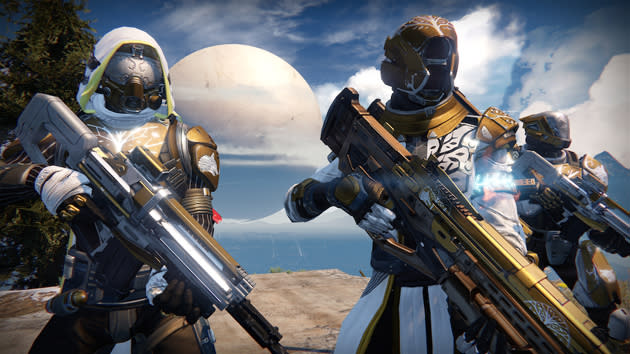 Let's say that you aren't among the 3.5 million daily Destiny players, and you want to try the action out for yourself (for free) to see if its worth your investment. Well, developer Bungie wants to make your dreams come true. You can now download a sample version of the game on either generation of hardware and give it a go without dropping $60. Perhaps best of all, any progress made will transfer over to the full game -- something that members of the alpha and beta tests weren't afforded (but would have appreciated thank you very much). So really, there shouldn't be much stopping you from at least giving the former Halo-house's new jam a go by this point. Except maybe your data cap, that is: Sony says the PlayStation 4 trial weighs in at 40GB.

In this article: Activision, Bungie, Destiny, gaming, hd, hdpostcross, PlayStation, ps3, ps4, xbox, Xbox360, XboxOne
All products recommended by Engadget are selected by our editorial team, independent of our parent company. Some of our stories include affiliate links. If you buy something through one of these links, we may earn an affiliate commission.