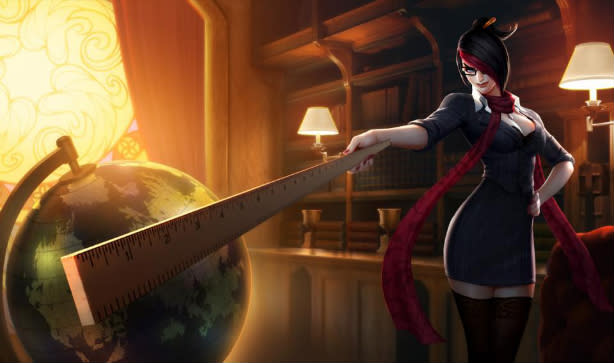 On Monday, NPR's All Things Considered host Robert Siegel talked to New Tech City podcast host Manoush Zomorodi about Robert Morris University's new athletic scholarship program, the first of its kind in the United States – scholarships for League of Legends players. The hosts rattled off the stats: $500,000 for 30 scholarships, similar to some football scholarships the school offers. Zomorodi noted that 32 million people watched the final League of Legends championship game this year, more than watched the last game of the NBA finals.

ZOMORODI: And from what I saw, Robert, it really was just like the football team or the track team - a tight-knit group.

SIEGEL: (Laughter) So what's it like to be a collegiate e-athlete?

Laughter. That's pulled directly from NPR's transcript of the broadcast, and you can listen to it here (this conversation at 3:08). During the final minutes of Siegel and Zomorodi's talk, there were titters and chuckles at factual information about the League of Legends scholarship.


Perhaps the laughter stood out because the beginning of the segment was handled as a standard news piece, with the personality and professionalism expected of NPR. Or, perhaps the laughter was so grating because it reminded me of another broadcast about Robert Morris University's League of Legends scholarship, this time from KPCC Southern California Public Radio.

I heard this broadcast in October, and almost immediately it rubbed me the wrong way, personally and professionally. Host A Martinez talked to Melcher, the coach of the university's League of Legends team, and Martinez approached the topic with incredulity. Melcher even let out a laugh when he began to explain the program, responding to Martinez's tone. One minute and 12 seconds into the interview, Martinez interrupted Melcher to giggle at the way students train:

MELCHER: The way these players practice and train, the same work rate is put into this as, you could say, a college basketball player.

MARTINEZ: "Practice and train," though, what goes into that?

MELCHER: We have a coaching staff hired, so players will come in after classes and they'll be put in different scenarios, they'll be working on game tapes from the week before –

Martinez kept up the chuckles, interspersed with important questions and information about the scholarship. The laughter in this one really bothered me, perhaps because it was concentrated at the beginning of the segment, during standard questions about a scholarship that I found truly interesting, and one that could benefit a lot of people I knew.

League of Legends isn't a strange, wild concept to people who play video games, and neither is the idea that people play MOBAs professionally. As these hosts note, League of Legends is an extremely popular game, and the professional side of it attracts tens of millions of players and viewers from around the world each year. The League of Legends championships sold out the Staples Center in Los Angeles in 2013, and ESPN aired the world finals for Dota 2, another MOBA, that one with a prize pool of $10 million.

Professionally, laughter is an odd approach to a subject as serious as paying for college. There's a journalistic standard at play: When reporting on a niche subject about which a reporter knows very little, it's best to present the information in a straightforward manner. Chances are it's not as weird or funny as an outsider may think, and reporters run a risk of offending and misrepresenting the very people they're discussing.

I get it – League of Legends is a video game, and society is still coming around to the idea of video games as "sports" (as are many video game players). The idea of a scholarship for playing a video game is still novel and fun, and I have no problem with hosts expressing that aspect of the story. I do take issue with what feels like people laughing at nerds playing video games.

In the US, schools provide more than $5 billion of scholarship money to football players annually, offering more than 20,000 scholarships in 1A alone. Universities offer men's and women's basketball players $2.1 billion in scholarships each year. Similarly, student baseball players receive $800 million, bowlers get nearly $31 million, cross country runners get $2.3 billion, rifle athletes have a pool of $2 million, and fencers receive $36 million.

Colleges offer money to students who can catch a ball, throw another ball into a hoop, slide another ball down a lane, to students who can run, shoot or wield a foil well. The ideas behind these sports are normalized in wider society, meaning we can look past the silliness of handling a ball well to see the true athleticism, strategy, teamwork and dedication that goes into these activities, and we can praise those who do them better than anyone else.

League of Legends players get $500,000 for 30 scholarships at one university. Robert Morris University is part of the NAIA, which doles out $500 million in scholarships to student athletes annually, with a cap on the number of scholarships that can be handed out per school, per sport. Football has the largest limit at 24, while basketball is 17 (combined divisions 1 and 2), and baseball is 12. League of Legends is not in the NAIA, and the scholarship is established by Robert Morris itself – and it allows the distribution of more scholarships than these NAIA-eligible sports. NPR reports that one Robert Morris student has half of his tuition covered by the scholarship, and another student has already left the school to go pro, an occupation that can pay $1 million a year.
Laughing at League of Legends scholarships degrades the people who have put in the time, research and practice to play the game well. Not only does laughter perpetuate the harmful jock/nerd dichotomy, but it may in fact keep serious League of Legends players from pursuing scholarships in college (because you better believe Robert Morris isn't the last university to offer one). Entering college is terrifying enough without popular news hosts implying that a student's passion is something to laugh at.

League of Legends isn't part of the NCAA, either, as many sports scholarships are. Still, as the NCAA puts it, "The real value of athletics scholarships is intangible. Without them, many student-athletes would be unable to pursue their athletics and academic dreams."

If that dream includes League of Legends, I propose that's something to applaud on an equal level as football, basketball or baseball – not something to snicker at.
In this article: college, esports, kpcc, LCS, league-championship-series, league-of-legends, league-of-legends-championships, media, NPR, scholarship, scholarships
All products recommended by Engadget are selected by our editorial team, independent of our parent company. Some of our stories include affiliate links. If you buy something through one of these links, we may earn an affiliate commission.