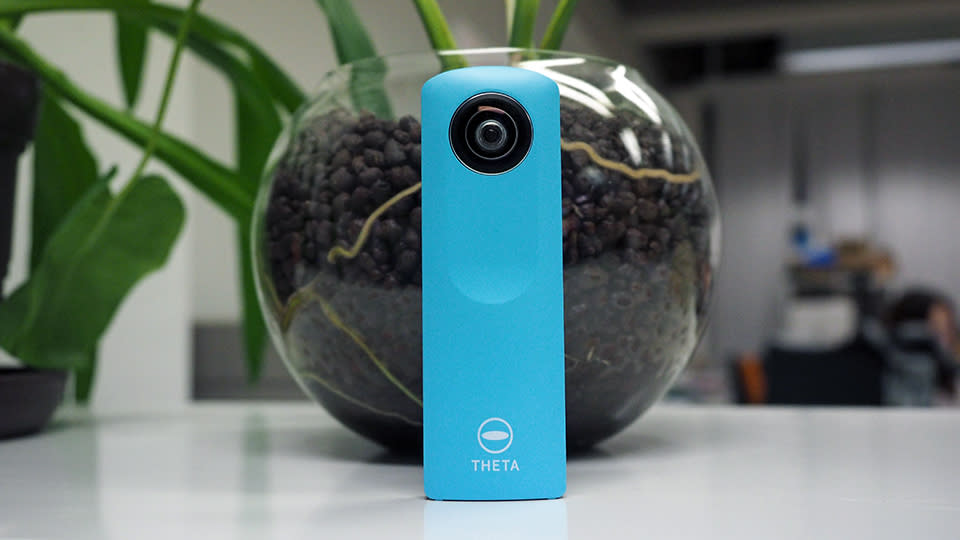 Ricoh's original Theta camera did a curious thing: it took instant 360-degree stills, courtesy of two hemispherical lens positioned either side of stick camera. We weren't completely sold on the initial model, which was also hampered by a $399 price tag that screamed niche photography enthusiast. The good news is that Ricoh has listened to said enthusiasts and, well, anyone else that stumped the money for the debut model. The upgrade has brought several improvements: firstly, the WiFi transfer speed from camera to smartphone has now doubled, (another issue with the first camera) while there's now a companion Android app -- something not there at the launch of the original. It also comes in five different poppy shades. But, most crucially, it can pretty effortlessly, capture photo sphere-style video (up to three minutes long) with a button press. It's still not quite perfect, but we've got more impressions and some samples after the break. Given the data involved with the images, the Theta has to pair through Wifi, not Bluetooth. Pictures can be recalled on the companion app in seconds, although to view video you'll need to connect to a PC with a cable: there's no way to beam the video without this laborious step. Worse still, our Mac didn't recognize the Theta as a drive, meaning you'll need to use iPhoto or similar to get at your photos and videos. Moving images then have to be reprocessed through a dedicated PC app before you can share a link to the uploaded (and interactive) video hosted on your own Theta profile.

There's a pop-up menu after processing that offers up embed codes, or share to Twitter, Facebook and Tumblr, but it's far from smooth, especially given the fact that yes, you're already using an app on your smartphone. Presumably the processing weight of stitching together video is too much for a smartphone -- but it remains a frustration in trying to show off what the stick camera is capable of.

There's 4GB of storage built-in, while you can adjust the camera settings (through the app), with ISO ranging from 100 to 1600, and shutter speed up to 1/8000 of a second. Which is fine, but we got our best results with strong indoor lighting or sunny days. The night time video we shot above gives you a good idea of the pros and cons. You get a good impression of the atmosphere of moment, but don't expect low noise results. The product does what it does well: smartphones attempting to replicate the still results aren't nearly as good, or as speedy. From a hardware perspective, apps simply can't do video, either. But then there's the price. In Japan, its priced just under $300 (35,000 yen) which makes it cheaper than its predecessor, but not quite enough to make it a casual imaging toy. Maybe they'll get it right with version three.

In this article: 360degree, camera, ricoh, theta
All products recommended by Engadget are selected by our editorial team, independent of our parent company. Some of our stories include affiliate links. If you buy something through one of these links, we may earn an affiliate commission.