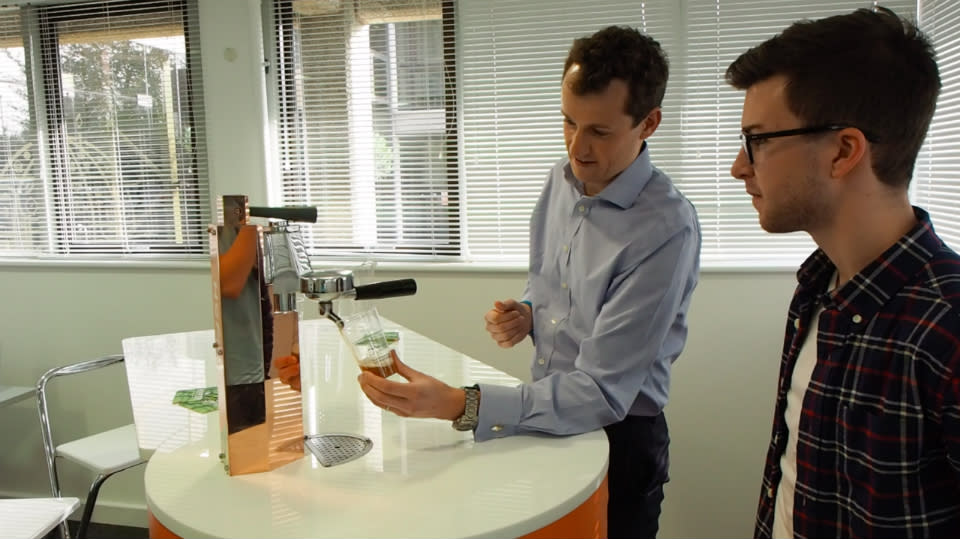 I'm tired of walking into musty pubs and ordering pints that are bland, poured incorrectly, or twice the price of the nearest off-licence. If I weren't meeting friends, I'd be out the door faster than Road Runner. Of course, more than a few social drinkers share my apathy, so a surge of public houses are starting to change tack. They're embracing top-notch craft beers and employ bartenders that put genuine care into your order. You feel like they want your business, and what you're getting in return would be difficult to replicate at home.

Cambridge Consultants has noticed the trend, too. The R&D company is something like Q's laboratory from the James Bond films, creating weird and wonderful gizmos for a range of different industries, including defence and security, health, energy and wireless communications. In the past, its multi-discipline teams have prototyped a tea-making device that brews the perfect cuppa in two minutes, a portable radar that can see through walls, and a water bottle that glows as you become dehydrated.

For its next experiment, Cambridge Consultants wants to give beer aficionados some added choice and excitement at their favourite bars. It looked to dry hopping, a post-fermentation process pubs and breweries employ to strengthen the flavour and aroma of their beers. By throwing fresh hops into a keg, their natural flavours are slowly extracted and infused for up to a couple of weeks. After toying with temperature, agitation and a ton of other methods, Cambridge Consultants realised that pressure could be used to turbocharge the process.

With this in mind, Hoppier was born. From the front, it looks just like a regular beer font, with a big lever at the top and a pump under the table: Nothing special. But peek around the back and the design becomes a little more alien. The team has integrated a steel portafilter, the kind you would normally find on a espresso machine. The beer, under pressure, is forced through this special brew chamber filled with crushed hops, which infuse the draught before it hits the pint glass.

The company is hardly the first to play around with the dry hopping technique though. Dogfish Head, a craft brewery in the US, unveiled a similar machine called Randall (aka Randall the Enamel Animal) in 2010. The device allows breweries to connect a tap on one side and run their preferred beer through two chambers; the first contains the fresh hops and the second gives the mixture time to settle and "defoam." The company then followed it up with the cheaper and more portable Randall Junior, which is roughly the size of a Thermos flask and gets to work when you leave it in the fridge. Some beer aficionados have even nailed the dry hopping process with traditional French presses.

"It gives people the opportunity to do their own thing, and make a custom beer that they could put their own name to."

The Hoppier could, in theory, be used to blend the flavours of other ingredients, such as fruit and spices. Edward Brunner, the company's head of food and beverage systems, says that stouts could benefit from the infusion of coffee grounds, something Hoppier is obviously more than equipped to do. It's a versatile machine, and in the hands of bartenders, I'm sure even crazier combinations could be discovered. "It just adds a bit of excitement," Brunner said. "It gives people the opportunity to do their own thing, and make a custom beer that they could put their own name to."

But what does it taste like? Does the machine actually deliver? Well, 'hoppiness' is a tricky characteristic to describe, but I could taste the difference immediately. The beer tastes somewhat fresher and the core flavors are stronger -- it's a richer, punchy pint that still feels natural and authentic. I wouldn't say it's superior to a regular draught, but it's different and makes a nice change from the generic beer selection found in most British pubs. Hoppier also succeeds as a spectacle. Normally when a bartender takes my order, I stand around and gaze absent-mindedly at the spirits behind the counter, or at whatever football match is being shown on TV. Watching someone pull a pint just isn't that exciting to me. But with the Hoppier, its espresso machine DNA helps to replicate the bustling coffee shop experience. The idea is that the machine, the aroma of the hops and the bartender's skill will make you feel like you're ordering something special. Normally, the dry hopping process isn't seen or advertised (I suspect most people are unaware that it even exists) but here, you''re able appreciate it and taste the difference immediately.

For all its promise of tasty, personalised beers and added theatre, it's still unclear if pubs and bars will get on board. Most landlords are under enough pressure as it is; upgrading beer fonts and keeping a stock of chilled hops isn't going to help. However, Cambridge Consultants say it's in talks with breweries and the initial feedback has been positive. So who knows, maybe I'm looking at (and tasting) the future here. At this stage at least, the Hoppier certainly succeeds as a proof of concept, and it would definitely liven up the dreary atmosphere offered in my local at the moment.

In this article: beer, cambridgeconsultants, dryhopping, hoppier, uk-feature, video
All products recommended by Engadget are selected by our editorial team, independent of our parent company. Some of our stories include affiliate links. If you buy something through one of these links, we may earn an affiliate commission.