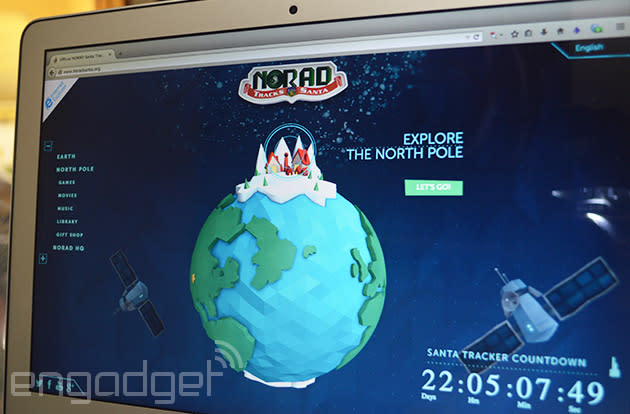 NORAD's Santa tracker for 2014 is now up and running, ready to help you count down the days till your kids are wont to start screaming for gifts. The agency has partnered up with Microsoft again this year, so expect to see a lot of Bing maps integration. In addition to the website itself, the duo has also released iOS, Android and Windows Phone apps, so you can monitor Santa's movements on the go. WP users can even ask their platform's voice assistant Cortana questions such as "Where is Santa now?". As usual, on Christmas Eve itself, you'll be able to follow Santa's journey through an interactive 3D globe (with a Bing maps overlay, naturally).

If you weren't aware, Google tracks Mr. Claus' arrival, as well, so that's another option. NORAD's been following him across the globe for a longer time, though, so we wouldn't be surprised if it's your tracker of choice. Besides, the aerospace's website is a lot more robust and features videos, games, Christmas music and more in addition to just the tracker itself.

In this article: microsoft, norad, santa, windows
All products recommended by Engadget are selected by our editorial team, independent of our parent company. Some of our stories include affiliate links. If you buy something through one of these links, we may earn an affiliate commission.