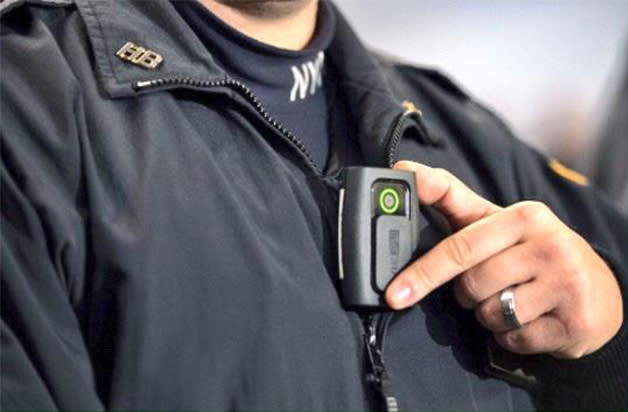 New York City's brass hasn't fully committed to tricking out its nearly 35,000 person police force with body cameras yet, but Mayor Bill DiBlasio is eager to give them a shot. That's why the NYPD is testing the waters with a pilot program that'll see select officers from six commands throughout the city go about their daily duties while wearing matchbook-sized cameras on their chests. According to the New York Times, that first batch of 54 camera-equipped cops could be on the streets in certain sections of the city as early this weekend.

Mayor DiBlasio hopes that strapping cameras to police officers' chests will improve accountability and help ease tensions between city residents and the cops charged with protecting them. Whether they actually help is another issue entirely. The announcement might be welcome news if you think sunlight is the best disinfectant, but still others are concerned (and perhaps rightfully so) that not even hard video evidence is enough to condemn cops when they act inappropriately.

Case in point: a Staten Island grand jury earlier today declined to indict Daniel Pantaleo, an NYPD officer who was caught on video ensnaring 43 year old Eric Garner in what appeared to be a chokehold before other officers helped subdue him. The entire ordeal lasted just a few minutes, and by the end of it Garner was pronounced dead. That the whole thing was caught on video is par for the course these days -- would it really make a difference if the officers involved were wearing cameras instead of being filmed by external ones? In some cases, sure. But there's a growing number of people (especially on Twitter) who don't think a push for more tech-laden cops will change the real, crucial underlying problems citizens across the country face.

Body cameras for the American police will not stop them from murdering people of color. Surveillance absent of justice won't end racism.

Barack wants to fund police body cameras? SWELL! What good are they if #EricGarner was murdered on camera & his killer isnt indicted?

Over and over again police shootings caught on camera and no indictment comes.Body cameras don't mean accountability. http://t.co/tgWtF8TFFi

In this article: bodycameras, cameras, law, lawenforcement, new york, nypd, police, wearable
All products recommended by Engadget are selected by our editorial team, independent of our parent company. Some of our stories include affiliate links. If you buy something through one of these links, we may earn an affiliate commission.