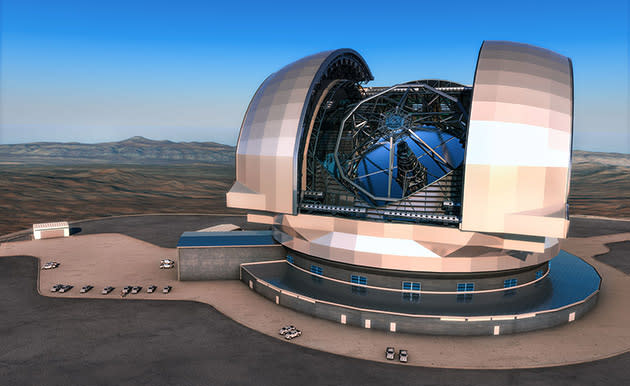 The construction of European Southern Observatory's Extremely Large Telescope, which will boast a humongous 39-meter aperture, is no longer in limbo. Its development in Chile's Atacama Desert is finally on track two years after the project was approved, thanks to Poland joining the organization. See, the country brought in enough money so that the telescope's now 90 percent funded, which was the goal the ESO set to greenlight phase one of construction. "Phase one" entails building the dome and the structure itself, a feat that will take 10 years and €1 billion ($1.24 billion) to complete.

Researchers will be able to use the telescope, even if it's not 100 percent complete, to observe the skies without issues once the first phase is done in 2024. The ESO will just add the missing components, including parts of the main mirror and an optics system that can reduce the blurring effect of the planet's atmosphere, during the second phase. It's unclear when phase two will begin, but the group is expecting more funding once Brazil official joins the circle. As you might have guessed, the Extremely Large Telescope is also extremely powerful and will allow scientists to look at and study nearby galaxies, stars and Earth-like exoplanets, among many other things in deep space.

Now that its construction's underway, this means we can expect at least three gargantuan observatories in the coming years. The Giant Magellan Telescope with its 24-meter aperture is slated to be up and running by 2021 at Carnegie Institution's Las Campanas Observatory. The Thirty Meter Telescope, on the other hand, is expected to open in 2022 near the summit of Hawaii's Mauna Kea volcano.

In this article: chile, EuropeanExtremelyLargeTelescope, space, telescope
All products recommended by Engadget are selected by our editorial team, independent of our parent company. Some of our stories include affiliate links. If you buy something through one of these links, we may earn an affiliate commission.