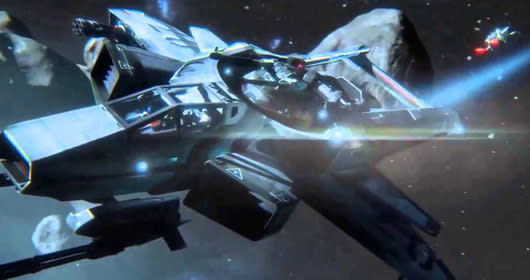 I'm a Star Citizen backer, but I didn't pledge enough to pilot the Anvil Hornet prior to launch. Thanks to Cloud Imperium, though, I'll be flying it in Arena Commander anyway, at least for the next week. The Hornet has been unlocked for all backers, according to a posting on the game's website.

"The Hornet is the civilian version of the F7A Hornet flown off of the elite Bengal carrier vanguard of the UEE Navy," CIG explains. "It may not be the prettiest ship but it is the go-to short range fighter due to Anvil's sturdy design and ability to take as much punishment as it can dish out."

In this article: anvil-hornet, chris-roberts, cloud-imperium, cloud-imperium-games, crowdfunding, hornet, internet-spaceships, kickstarter, sandbox, sci-fi, spaceship, star-citizen, video
All products recommended by Engadget are selected by our editorial team, independent of our parent company. Some of our stories include affiliate links. If you buy something through one of these links, we may earn an affiliate commission.