Like iPad, blistering in the sun: Temperature issues reported

Superman 64 almost had an evil twin on the PS1

The best video game blunders of 2006 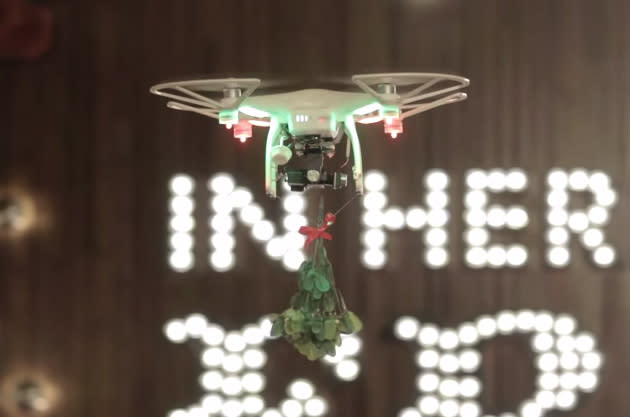 If you think a crowded restaurant is one of the worst places to fly a drone in, photographer Georgine Benvenuto will most likely agree with you. After all, the mistletoe drone TGI Fridays unleashed in its Sheepshead Bay, New York location didn't lead to a kiss -- instead, it took a small chunk off her nose and clipped her chin. According to Courier Life's Brooklyn Daily (where she worked), the operator encouraged the reporter with Benvenuto to land a 10-inch drone on her hand during a demo on December 4th. While it was the smaller of the two drones on site, and the propellers were only five inches in length, their blades were both sharp and uncovered.

The operator, David Quiones, claims the accident wouldn't have happened if the reporter didn't flinch when the flying contraption landed on her hand, sending the drone hurtling towards her companion. Despite drawing blood from someone's face, he doesn't believe the incident will affect business: "If people get hurt, they're going to come regardless. People get hurt in airplanes, they still fly. There is a risk involved -- anything flying, there is risk." As for TGIF, well, a spokesperson told Brooklyn Daily that the company isn't worried about more customers getting injured. People generally steer clear of the drones on their own, she said, adding that they do not let consumers touch them. We just hope they've now forbidden their operators from attempting to land on people's body parts, as well.

In this article: bad idea, drone, drone accident, tgif
All products recommended by Engadget are selected by our editorial team, independent of our parent company. Some of our stories include affiliate links. If you buy something through one of these links, we may earn an affiliate commission.