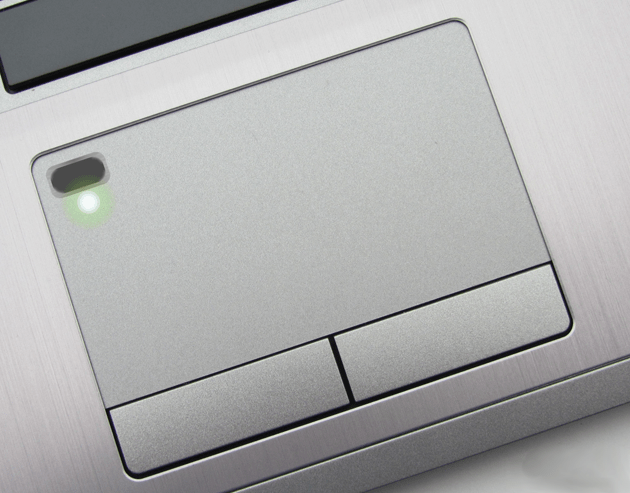 At some point -- probably when the iPhone 5s came out -- fingerprint sensors became cool. Yes, they've been used on business laptops for years, but it's only recently that we've started to see them in stuff consumers would buy -- things like smartphones and tablets. Now, it seems, we're coming full circle. Synaptics, the leading maker of laptop trackpads, just announced something called the SecurePad, a touchpad with a fingerprint sensor built into the upper-left corner. Unlike existing fingerprint scanners for laptops, which require users to swipe their fingers over the sensor, this one uses capacitive touch, similar to the fingerprint modules used in devices like the iPad mini 3 and Galaxy S5. The result should hopefully be a more reliable experience than you would have gotten on older-gen laptops, but as we've seen with newer products, even touch-based fingerprint scanners can be a mixed bag.

Of course, a fingerprint sensor is only as good as the things you can do with it -- log in, pay for stuff online, et cetera. And in that sense, today's Synaptics news comes at an interesting time. The company is already a member of the FIDO (Fast Identity Online) Alliance, which is backed by tech giants like Google, Microsoft, Qualcomm, Samsung, Lenovo, Dell and Netflix, along with some important players in the payments space, including Visa, MasterCard, Bank of America and PayPal. Just yesterday, too, FIDO released version 1.0 of its fingerprint-authentication standard, which should pave the way for wider use. So, while you might not be accustomed yet to using fingerprints in lieu of passwords, that could change as FIDO finalizes its standard, and as more web developers and hardware makers start adopting it.

Synaptics says the SecurePad sensor is now available for OEMs to start building into their laptops. There's no word yet on which PC makers will be using it, but one thing is for sure: This new SecurePad is destined for consumer PCs. Specifically, high-end consumer PCs. For the time being at least, Synaptics says we're likely to see its new touchpad in pricier systems like Ultrabooks, though who's to say it won't eventually trickle down into the mainstream? Also, as you can see in the above photo, Synaptics is currently showing off the touchpad with discrete left and right buttons. That said, though, the sensor is also compatible with Synaptics' one-button Clickpad, as well as its newer, pressure-sensitive ForcePad. So keep a lookout for new laptops with those kinds of touchpads as well. For our part, we expect to see the first SecurePad-enabled laptop on display at CES next month -- we'll be sure to get hands-on then and let you know how well this setup actually works.

In this article: fingerprint, fingerprint sensor, Fingerprints, FingerprintSensor, securepad, synaptics, touchpad, trackpad
All products recommended by Engadget are selected by our editorial team, independent of our parent company. Some of our stories include affiliate links. If you buy something through one of these links, we may earn an affiliate commission.