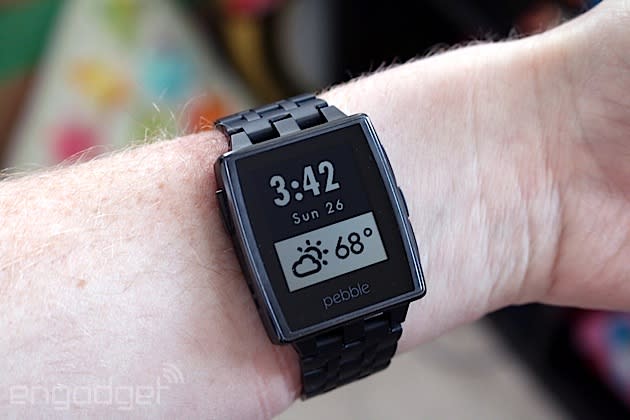 What's a little startup like Pebble to do when there are so many Android Wear smartwatches out there? Two things: cut the price, and make the watches as useful as possible. After recently adding apps for Dominos Pizza and PayPal, the company is updating its Android application so that it's compatible with Android Wear notifications. Which is to say, you can act on notifications directly from your watch. (Think: dismissing alerts and such.) From a developer standpoint, that means that if an app is already Android Wear-compatible, it'll work on Pebble devices too; devs don't have to code their applications twice. The feature is still in beta, but it's open to everybody, so any of you can try out this new feature, starting now. All you need is a Pebble or Pebble Steel watch, with a smartphone running Android 4.0 or higher. And, of course, you need the latest version of the app (v2.3) installed. Have at it!

In this article: Android, android wear, androidwear, Pebble, update, updates
All products recommended by Engadget are selected by our editorial team, independent of our parent company. Some of our stories include affiliate links. If you buy something through one of these links, we may earn an affiliate commission.