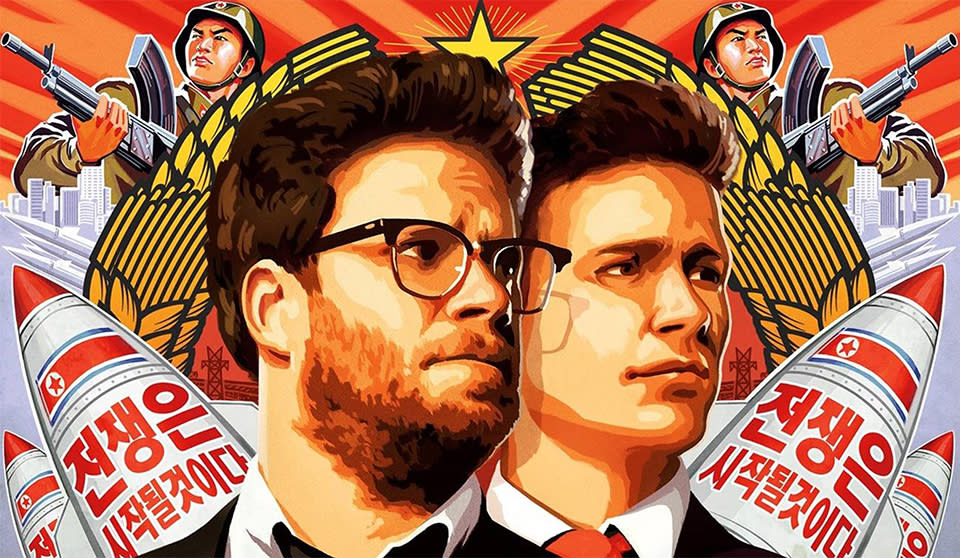 The Guardians of Peace (they of the titanic Sony Pictures hack) showed off an almost benevolent side this weekend when it offered to withhold personal employee information should those victims object. Lest you start feeling pangs of empathy though, the group -- or someone purporting to be a member of the group -- issued a public threat that seems to target moviegoers and theaters that will run the James Franco/Seth Rogen comedy The Interview.

"Soon all the world will see what an awful movie Sony Pictures Entertainment has made," the note reads. "The world will be full of fear. Remember the 11th of September 2001. We recommend you to keep yourself distant from the places at that time." However sinister the group's message was, you should obviously take it with a grain of salt: The Department of Homeland Security told Mashable that there was "no credible intelligence" regarding an actual attack in the coming weeks.

BuzzFeed also reports that Rogen and Franco have begun canceling media appearances ahead of the movie's Christmas Day release, further legitimizing the threat. The movie's L.A. premiere came and went without incident last week (unless you count plenty of critical pans), but Variety says the pair is still slated to attend the movie's East Coast premiere in New York on Thursday... though the whole thing has apparently been dialed down so as to attract less attention.

That cryptic warning wasn't the only thing the Guardians released today. This past weekend the group promised yet another treasure trove of even more intriguing files, a Christmas gift of sorts designed to cast Sony in an even harsher light. The first part of that "gift" was made available for download today -- we haven't had the chance to sift through the files ourselves just yet, but the archive is titled "mlynton.rar," a not-so-veiled reference to the Sony Pictures CEO who recently said that hackers couldn't take the studio down. Seems like the Guardians are intent on proving him wrong. It wouldn't be a shock to see another batch of damning emails, this time from the head honcho himself, but we'll find out one way or another once this download finishes.

The full text of the threat follows (edited for formatting):

Warning. We will clearly show it to you at the very time and places "The Interview" be shown, including the premiere, how bitter fate those who seek fun in terror should be doomed to. Soon all the world will see what an awful movie Sony Pictures Entertainment has made. The world will be full of fear. Remember the 11th of September 2001. We recommend you to keep yourself distant from the places at that time. (If your house is nearby, you'd better leave.) Whatever comes in the coming days is called by the greed of Sony Pictures Entertainment. All the world will denounce the SONY.

Sony considering scratching plans to release "The Interview" on Dec. 25, says a person with knowledge of the situation. More details soon

In this article: av, entertainment, gear, guardiansofpeace, hack, security, sony, sonypictures, theinterview, TL18NKHCK
All products recommended by Engadget are selected by our editorial team, independent of our parent company. Some of our stories include affiliate links. If you buy something through one of these links, we may earn an affiliate commission.