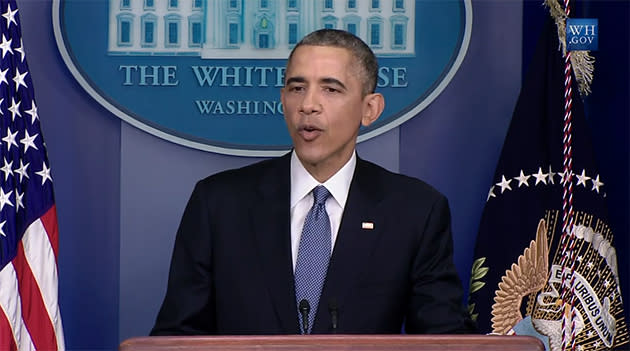 Sony's already acquiescing to demands made by the North Korean hackers associated with the Guardians of Peace, and the US' commander-in-chief is none too pleased by it. In a press conference that led off with a recap of his past year in office, President Barack Obama said in no uncertain terms that Sony's decision to cancel the theatrical release of The Interview was "a mistake."

"We cannot have a society in which some dictator someplace can start imposing censorship here in the United States," Obama said. "If somebody is able to intimidate folks out of releasing a satirical movie, imagine what they start doing if they see a documentary they don't like or news reports they don't like. Or even worse, imagine if producers or distributors start engaging in self-censorship because they don't want to offend the sensibilities of someone whose sensibilities probably need to be offended. That's not who we are. That's not what America's about."

He couldn't quite resist jabbing at the state of North Korea's regime either, dryly noting that "it says something interesting about North Korea that it decided to have the state mount an all-out assault against a satirical film starring Seth Rogen."

While he respects the concerns that Sony Pictures execs had to consider while chewing on that choice, the president still wishes that Sony had spoken to him first. If they did, Sony's brass would probably get an earful of a very familiar argument. Prior to President Obama's public declaration against appeasement, Hollywood A-lister George Clooney recently circulated a petition to his contemporaries that pushed for the online release of the film, just to send North Korea the message that a foreign power doesn't get a say in what content Americans get to consume.

And what of the most important issue here, the proportional response being weighed by the country's national security heavyweights? Obama didn't do much more than confirm that North Korea was behind the Sony attack, and that the government would indeed respond. Somehow. For now he's playing the most intriguing cards close to his chest, though that raises the question of how good (or well thought out) his hand is right now.

In this article: fbi, guardiansofpeace, hack, northkorea, obama, presidentobama, sony
All products recommended by Engadget are selected by our editorial team, independent of our parent company. Some of our stories include affiliate links. If you buy something through one of these links, we may earn an affiliate commission.