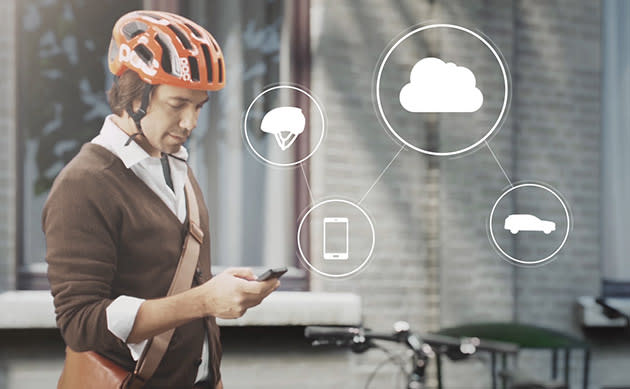 You know what will go perfectly with those futuristic rocket-powered, heartrate-monitoring bikes? This smart helmet that Volvo wants to create. It's a two-way system that works by uploading both cyclists' and drivers' locations to Volvo's cloud. While a connected car's in-dash system makes that possible, the helmet needs to be linked to a bike app like Strava to do so. Bicyclists can then be warned that there's a car coming their way or crossing their path by warning lights built into the helmet.

Drivers, on the other hand, will be alerted via a heads-up display on the windshield if a bicycle's nearby, which is especially useful if it's coming from a blind spot. It's an intriguing idea, but if it works is another matter, as not everyone drives a Volvo -- also, some people might not be too keen on uploading their locations to the cloud. Several automakers have shown off V2X (vehicle to environment) systems that connect locally and directly, but they aren't on the market yet. If you'd like to know more about the concept then stay tuned for more details, because we'll be seeing it in person at CES 2015.

In this article: bike, helmet, mobilepostcross, smarthelmet, volvo
All products recommended by Engadget are selected by our editorial team, independent of our parent company. Some of our stories include affiliate links. If you buy something through one of these links, we may earn an affiliate commission.