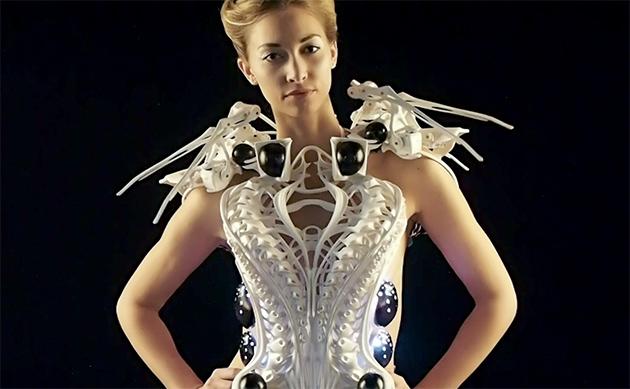 Silk? Meh. Taffeta? Blergh. When it came time to craft her latest dress, Dutch artist Anouk Wipprecht instead turned to 3D printing and one of Intel's teensy Edison modules for something truly special. The end result? A "spider" dress that leaps to defend its wearer when it senses motion. (Our internal pedants would point out that the six legs make it more of an insect dress than a spider dress, but we digress).

The ripply, skeletal bodice is 3D printed (or rather, laser sintered) and laden with motion and respiratory sensors that link back to the main processor. Approach it too quickly or too aggressively and those arms spring into a defense position. But, as Wipprecht told Motherboard, a more discreet saunter up to the wearer might be met with "smooth, suggestive gestures". The dress takes into account how calm the user is thanks to those sensors, which in a way makes the garment less of a gussied-up wearable and more of an extension of the wearer's body. Wipprecht is no stranger to the intersection of haute couture and spindly machinery - she unveiled an earlier version of the spider dress two years ago with the help of hacker-roboticist Daniel Schatzmayr that drew in similar themes of personal space in an increasingly mechanized world. This year's version though amps up the level of beautiful body horror with a sleeker, more organic aesthetic that looks a little more like something H.R. Giger would've dreamed up.

Curious to see the thing in action? So are we, and the teaser video below just isn't enough. Wipprecht's going to show the dress off properly at CES in just a few weeks, so you can expect one of us to at least try and put the thing on.

In this article: 3dprinting, ces, culture, design, dress, fashion, gear, timeline16techwear
All products recommended by Engadget are selected by our editorial team, independent of our parent company. Some of our stories include affiliate links. If you buy something through one of these links, we may earn an affiliate commission.