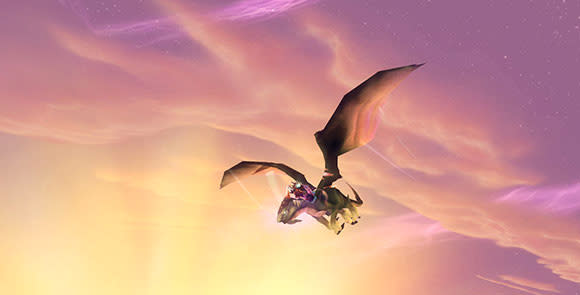 The developers' decision to remove flight from Warlords of Draenor zones was controversial to say the least -- some were fans of the decision and others were decidedly not. We've been without it for awhile now. After having experienced Draenor without it, how do you feel?

Personally, I was a fan of removing flight. Getting my first flying mount back in Burning Crusade was a magical moment, I'll admit. Over time, though, I felt its inclusion detracted from World of Warcraft have a cohesive, meaningful world. It's often said that if you don't like flight, you don't have to use it. While that's true, players are going to use all of the tools available in a video game, myself included. I didn't like flight, but the game had flight, so I wasn't going to intentionally make my experience more difficult than that of everyone else. I stand by that. In general, I'm a fan of a no-flying Warlords of Draenor and continue to be.

There is one exception: Nagrand. Treasure hunting in Nagrand proved frustrating. Those treasures felt like the developers created a zone intended for flying mounts prior to removing them. Trying to use the Steamwheedle gliders only infuriated me more -- I couldn't even see half of the treasures in the game world to know where to aim even though they were on my map. The glider moved too fast for me to look around and spot it. It's entirely possible (and likely) that I am just bad at navigation with those things, but I gave up on getting those treasures and most of them still lay unclaimed. Trying to get them made me rage more than a little, and for the first time, I wished flight was still a thing. I'm also perplexed why they added an item such as Aviana's Feather in the expansion in which they took a stand against flight. With its relatively short 10 minute cooldown, I can use it to get wherever I want to go without partaking in the actual world whatsoever, much like a flying mount. A glider-on-demand is apparently okay, but flying mounts are not. Bizarre, I think.
In this article: featured, flight, flying-mounts, game-discussion, gamer-discussion, world-of-warcraft-discussion, world-of-warcraft-topics, wow-discussion, wow-hot-topics, wow-issues, wow-topics
All products recommended by Engadget are selected by our editorial team, independent of our parent company. Some of our stories include affiliate links. If you buy something through one of these links, we may earn an affiliate commission.