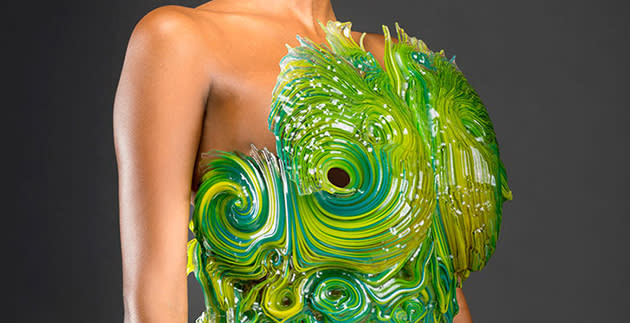 2015 is coming up quick -- and Inhabitat is counting down the days to the new year by showcasing its top posts of 2014! It's been a big year for green tech and environmental news -- take a look at the most inspiring stories, the funniest and the most disturbing -- plus the biggest breakthroughs in wearable technology.

In the future, we won't drive cars -- we'll all be passengers. Google just unveiled the first working prototype of its new self-driving car. It'll probably be some time before the Google car is ready for the market, but it's neat to see how far the prototype has come. In other green automotive news, Tesla just unveiled the Roadster 3.0, which features a streamlined profile that reduces drag and a better battery with a range of 400 miles. The electric automaker is also preparing to launch a pilot battery-swap program that will enable electric car owners to recharge in just three minutes. The pilot program will kick off in Harris Ranch, California. Tesla predicts that once the program evolves, battery swaps could be done in less than a minute. If you've been thinking about buying a hydrogen car, this would be a good time to act. A federal tax credit worth up to $8,000 for fuel cell vehicle purchases is set to expire on New Year's Eve. Wireless charging could be the future of electric cars, and one small city is giving the technology a test run. The Swedish car company Scania is launching a wireless charging system for Södertälje's fleet of 2,000 city buses that could save 13 million gallons of fuel every year. Scientists at NASA are dreaming about sending manned missions to Venus, and in preparation, the agency announced plans to send robotic airships to collect initial observations.

A debate has been raging in recent years about whether the United States could power itself using renewable energy. A new report by Environment America comes down firmly on the side of renewables, showing that the US could power itself with solar power 100 times over. In other renewable energy news, the American solar company Rayton has produced super efficient and affordable solar panels that are cheaper than fossil fuels. The UK's largest solar farm just came online, providing enough energy to power 14,000 homes. The 46-megawatt farm in Oxfordshire also provides grazing land for sheep, and native wildflowers are also planted on the site to promote biodiversity. And in Japan, Kyocera Corporation and Century Tokyo Leasing Corporation are teaming up to build the world's largest floating solar installation. The massive project will include 50,000 solar modules, and it will generate enough energy to power 4,700 homes.

Paper is useful stuff, but it's the scourge of forests -- nearly 4 billion trees are cut down each year to make paper. Thanks to new technology funded by the US Department of Agriculture, we could soon be moving toward a paperless society. Researchers from the University of California have developed a new type of treeless, inkless paper that can be reused up to 20 times. In space news, astronauts on the International Space Station recently used a 3D printer to print out a socket wrench, marking the beginning of a new era in space-based 3D printing. The development could revolutionize not only the space station's ability to get things done, but also the future of space exploration. If we're going to spend more time in space, astronauts are going to need better space suits. A team of scientists is working to develop living, bacteria-filled space suits that support human life. Four decades ago, scientists from MIT developed a computer model to determine whether the path of industrialized society is leading to global collapse. They published their findings in a book, titled The Limits to Growth, which forecasts a grim outcome for humanity. The results were widely dismissed in the decades that followed, but new research finds that the book's projections were dead on. On the green design front, the Swiss architecture firm Bureau A built a home that looks like nothing more than a large boulder, blending into the landscape in the Swiss Alps. Meanwhile, Nest, the California company best known for its smart thermostats, redesigned a gondola at the Squaw Valley ski resort, transforming the interior into an adorable, tiny "house in the sky." The cozy space features cedar planking, Pendleton-wrapped benches, framed artwork and curtains. And in business news, eBay just became the 100th company to cut ties with ALEC, the nonprofit organization funded by corporate interests that lobbies to dilute and overturn environmental protection laws.