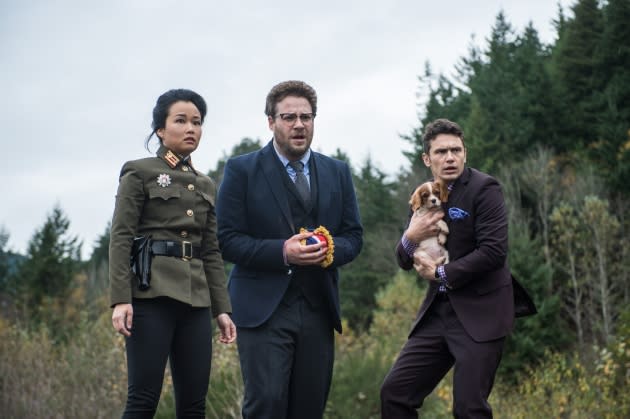 There was a ton of hoopla about Sony releasing The Interview through internet services before it even hit theaters, but how much did this not-entirely-intentional experiment in online distribution pan out? Quite well, if you ask Sony. It just revealed that the movie racked up $15 million in digital rentals and sales (spread across 2 million customers) between its Wednesday release and Saturday, making the North Korea-themed comedy the studio's "#1 online film of all time" within a matter of days. The company isn't breaking down numbers by service, but Recode's sources claim that the "vast majority" of business came from Google Play and YouTube. Sorry, Xbox Video.

The figures also mean that The Interview earned more online than it did in theaters (currently estimated at $3 million), although that's not hard. The theatrical release was limited to a relatively small batch of independent movie houses rather than the thousands of locations run by major chains like AMC -- for many people, internet viewing was the only way to see what all the fuss was about. You're probably not going to see Sony repeating this launch strategy any time soon, then, but it at least shows that the media giant is salvaging something out of the hacking drama from the past few weeks.

In this article: google, googleplay, googleplaymovies, hdpostcross, internet, microsoft, movies, northkorea, sony, sonypictures, streaming, theinterview, xboxvideo, youtube
All products recommended by Engadget are selected by our editorial team, independent of our parent company. Some of our stories include affiliate links. If you buy something through one of these links, we may earn an affiliate commission.