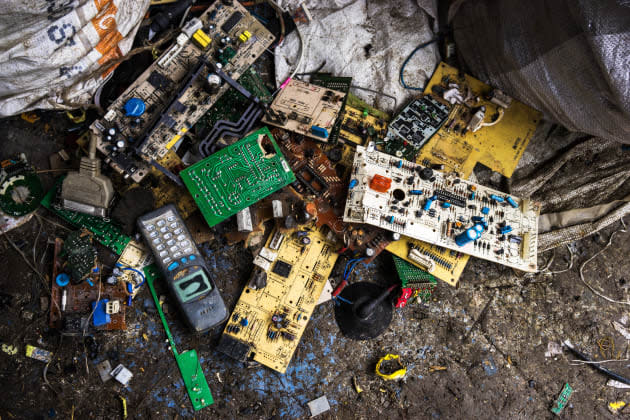 It's no secret that we live in an increasingly disposable world. Where once we would spend hours or even days repairing and customizing our gadgets and home appliances, now we just replace them when something breaks or fails to live up to expectations. Danielle George, professor of radio frequency engineering at the University of Manchester, may sound like a bit of a crank when she complains that people under 40 expect everything to "just work," but she has a point. If your Nexus 4 starts seeming a little slow, most people don't wipe it out to get a fresh start or install a lightweight ROM. They just go out and buy the Nexus 6. If your laptop battery barely lasts an hour, you don't crack open your MacBook Air and swap in a new one; you use it as an excuse to pick up the latest generation of Apple's ultra-light machine.

To be fair, many of our modern gadgets are either too complex for the average person to repair or were designed specifically to discourage users from servicing their devices. But this has led to a world drowning in a sea of discarded electronics. While governments, NGOs and companies have stepped up to try and fight the problem, consumers can help simply by repurposing their aging gear. And that's where the ever-growing maker movement comes in. Professor George is giving a series of lectures at the Royal Institution in Britain encouraging people to breathe new life into their goods through good ol' ingenuity.

The series is called, Sparks will fly: How to hack your home and includes lessons on building a projector with just a smartphone, a shoe box and a magnifying glass, as well as turning a water bottle into a lamp. Sure, it's not quite as helpful as learning to replace a cracked iPhone screen, but it's also less intimidating. (By the way, if you want to replace a cracked iPhone screen, iFixit is home to plenty of helpful guides.) The goal is not to convince everyone to suddenly stop buying new gadgets, but simply to help "young people to realize that that they have the power to change the world right from their bedroom, kitchen table or garden shed." And maybe, once they realize they don't need to drop several hundred dollars on a high-end projector, convincing them to turn that seven-year-old laptop into a perfectly serviceable home theater PC will be much easier.

In this article: Danielle George, Disposable, e-waste, makers, recycling, royal institution
All products recommended by Engadget are selected by our editorial team, independent of our parent company. Some of our stories include affiliate links. If you buy something through one of these links, we may earn an affiliate commission.