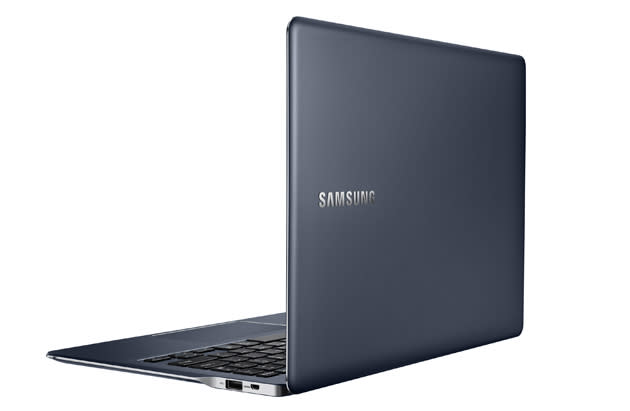 We hope you like super skinny laptops, because you're going to be seeing a hell of a lot more of them in 2015. Samsung just took the veil off its new ATIV Book 9 Ultrabook, which comes in at just 0.45 inch thick and 2.09 pounds. That's insanely compact for a 12.2-inch machine and indeed, it's the thinnest and lightest notebook Samsung has released yet. (Given Sammy's history with razor-thin laptops, that's saying a lot.) Like so many other slim machines that have come out lately, the Book 9 uses one of Intel's new Core M processors, which were designed specifically to allow for skinnier designs. Even more than its svelte profile, though, the real star of the show might actually be the display. Not only is the 2,560 x 1,600 resolution high for a machine this size, but Samsung also included an "outdoor mode" that takes the brightness from an already-impressive 350 nits all the way up to 700. The only concession seems to be that it's a non-touch panel -- kind of a necessity, though, if you wanna build a machine this thin. Assuming you do in fact keep the brightness at a more moderate level most of the time, the battery life should be pretty long -- up to 10.5 hours, according to Samsung. In addition, the Book 9 has an Ultra Power Saving Mode similar to Samsung's smartphones, which allows desperate users to squeeze out an extra hour of runtime by automatically shutting down all non-essential services running on the machine. Also, like many other Core M laptops, the Book 9 is fanless, which should mean it runs pretty quietly. Does that also mean it runs cool? We'll see, but if our early impressions of Core M are any indication, it's unlikely to overheat. The Book 9 will go on sale sometime in Q1 of 2015, and will be available in two configurations: a $1,200 model with 4GB of memory and a 128GB solid-state drive, and a $1,400 unit with 8GB of RAM and a 256GB SSD.

Additionally, Samsung unveiled the ATIV One 7, the company's first curved-screen all-in-one. Heck, and as far as we know, it's the first curved all-in-one, period. Despite being somewhat of an oddity, though, it actually looks quite a bit like Samsung's monitor and TV range, just with enough heft around the body to accommodate all the computer components that lie within. Those include an Core i5-processor, 8GB of RAM and a 1TB 5,400RPM hard drive. As for the screen itself, it's actually of fairly middling quality, that impressive curvature aside. What we have here is a 27-inch display, with full HD resolution (not quad HD or some such). It's also a TN panel, which means the viewing angles might not be quite as wide as competing machines with IPS screens. Then again, one of the purported advantages of a curved display is that viewing angles from the side are inherently better, so perhaps we're taking an overly pessimistic tone here. In any case, if this is just the sort of thing you've been waiting for, you can scoop one up later this quarter, to the tune of $1,300.

15
In this article: ativ book 9, ATIV One 7, ativbook9, ces, ces2015, core m, corem, hands-on, intel core m, intelcorem, samsung, samsung ativ book 9, samsungativbook9, SamsungATIVOne7, ultrabook, ultrabooks
All products recommended by Engadget are selected by our editorial team, independent of our parent company. Some of our stories include affiliate links. If you buy something through one of these links, we may earn an affiliate commission.