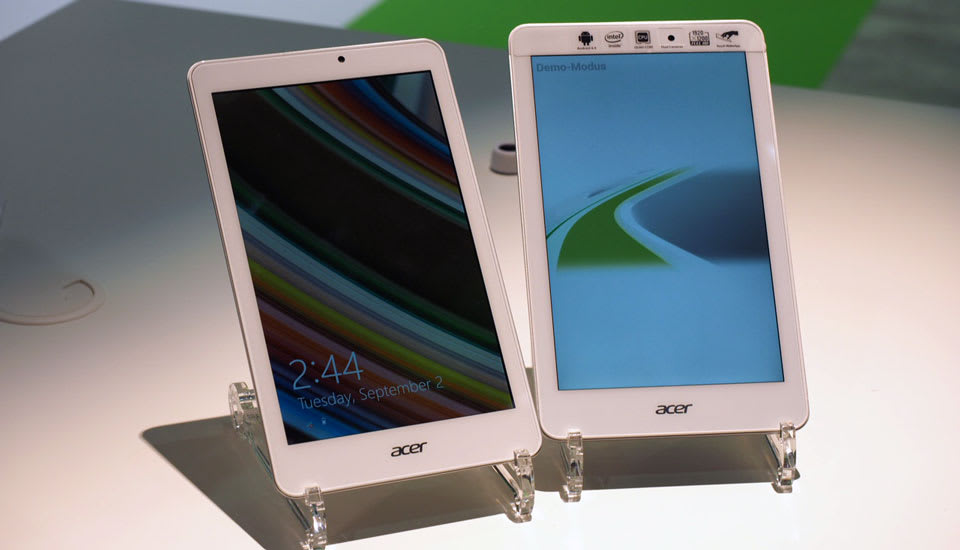 Acer's taken more than a passing fancy to Chrome OS of late, but at this year's IFA, the company's showing a rekindled love for its affordable tablet range. Its first new slates since the beginning of the year come in two sizes, with the more portable 8-inch form factor also offering a choice of platform. The Iconia One Tab 8 runs Android 4.4 KitKat on a quad-core Intel Atom processor (the Z3735G, if you're interested), with an 8-inch, 1,280 x 800 IPS display up front. Otherwise, it's got most of the standard features you'd expect on a tablet, like a pair of cameras and microSD slot for storage expansion. Now picture essentially the same hardware configuration, but instead running Windows 8.1 with Bing, and you've got the Iconia Tab 8 W. Successor to the Iconia W4, the Tab 8 W also boasts up to eight hours of battery life and one free year of Office 365. Whether you prefer Google's or Microsoft's OS, both 8-inch slates will launch next month in Europe for €150, and in the US in November for $150.

For bigger appetites, Acer's also announced the Iconia Tab 10 today -- its first 10.1-inch tablet without a keyboard companion since last year's Iconia A3. Opting for a quad-core Mediatek processor running Android 4.4 KitKat, the full HD (1,920 x 1,080) IPS display is lovingly covered with Corning Gorilla Glass. The larger slate also makes room for a micro-HDMI port to complement the WiDi standard, and will be available this month for €199 in Europe and $199 in the US.

Dan Cooper and Ben Gilbert contributed to this report.

In this article: acer, acericonia, hands-on, iconiaone8, iconiatab10, iconiatab8w, ifa, ifa2014, tablet, tablets, windows8.1withbing
All products recommended by Engadget are selected by our editorial team, independent of our parent company. Some of our stories include affiliate links. If you buy something through one of these links, we may earn an affiliate commission.