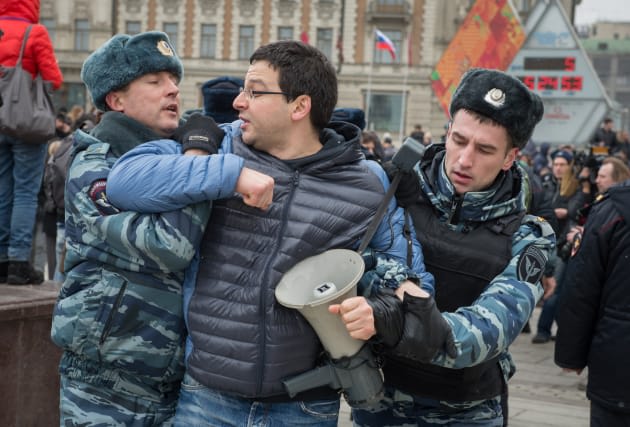 Next week supporters of Alexei Navalny, a lawyer and anti-corruption crusader currently under house arrest in Russia, are planning a rally that the Kremlin would really rather not happen. So, to that end, the government has begun issuing block orders to the likes of Twitter, Facebook and Google to keep information about the rally offline. But, the companies don't appear to be inclined to comply... at least, not any more. When the rally was first announced last week, a prosecutor from Russia's communication's regulator issued the block orders. Facebook honored the first request, but when more pages promoting the rally cropped up and criticism was leveled at the social network, it decided to get its lawyers involved and has left the new pages up. Twitter and YouTube have received similar requests, but the sites appear content to let videos and tweets promoting the rally live on.

More often than not though, in the past, companies have complied with the Kremlin's requests to remove content it's deemed subversive. Earlier this year, when Twitter and Google refused to respect similar requests from the Turkish government, it led to a showdown that saw the services blocked completely in the country. It's possible, though unlikely, that the Russian government could use similar tactics to keep its citizens from getting information about the rally. But, at this point it would appear the cat is out of the bag and blocking the services wouldn't probably only draw more attention to the protest.

This is just the latest in a series of events that have seen tensions between the western tech companies and the Russian government on the rise. Google recently closed its Russian offices, and the government is trying to force the companies to store user date on servers inside its borders. At the same time, relations between the US government and the Kremlin have grown increasingly strained over a variety of issues, including the military showdown in Ukraine.

Source: Wall Street Journal
In this article: Alexei Navalny, censorship, facebook, google, kremlin, russia, twitter
All products recommended by Engadget are selected by our editorial team, independent of our parent company. Some of our stories include affiliate links. If you buy something through one of these links, we may earn an affiliate commission.