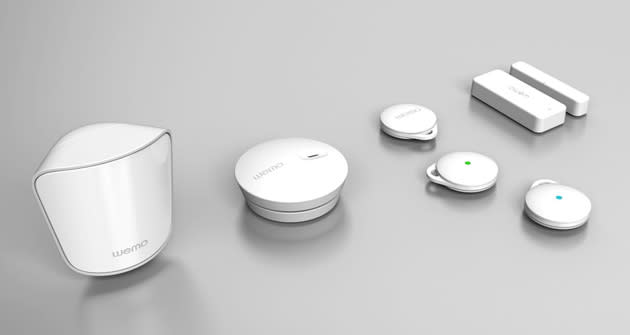 Do you want to know every little nuance of what's going on in your home? You'll want to give Belkin's new WeMo home sensors a look, then. The surprisingly wide range of household trackers includes a door-and-window sensor, a keychain tracker, a motion detector and a water efficiency monitor -- there's even an alarm sensor that listens for sounds from other sensors, like smoke detectors. All of the devices will alert you if something's amiss, whether you're worried about intruders or tend to run the kitchen faucet for too long. And like the rest of Belkin's highly modular WeMo hardware, they'll frequently work in tandem with other gadgets on the platform. They can turn on the lights when you step into a room, or ramp up the air conditioning only when your window is closed. Most of the sensors will arrive in the second half of 2015, with pricing coming later. The water sensor is still in field testing, however, so it won't be ready to analyze your plumbing until the tail end of the year. 6
In this article: alarm, belkin, ces, ces2015, door, home, homeautomation, household, internetofthings, motion, motionsensor, security, sensor, water, wemo, window, zigbee
All products recommended by Engadget are selected by our editorial team, independent of our parent company. Some of our stories include affiliate links. If you buy something through one of these links, we may earn an affiliate commission.