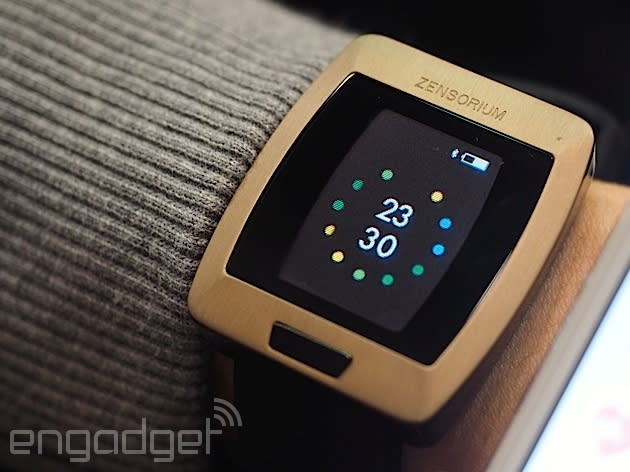 We've seen wearables that track our heart rate, activity levels and sleep patterns, but rarely do we see one that tracks our mood as well. That's the idea behind Zensorium's Being, a wearable that promises to not just monitor the usual activity tracker data such as NREM and REM sleep, heart rate, steps, calories burnt, distance and speed, but also your mood. And apparently it's not just a glorified mood ring. At a pre-CES event in Las Vegas, a Zensorium spokesperson tells us that the Being, when combined with an accompanying iOS or Android app, is able to tell us at what time of the day we're feeling a particular mood. The moods that it tracks are Distress, Excited, Normal and Calm (though the prototype that we saw had different moods displayed on the app). The watch apparently figures this out by monitoring both your heart rate and blood pressure -- it can be worn on the wrist or clipped onto your clothes.

Unfortunately, I wasn't able to test this out because the product the company had on the show floor was a non-working prototype. I did find out a few details about the Being however; it appears to have an OLED display, a capacitive touchscreen and a battery life of "two to three days." The colored dots that you see on the display here are indicative of the mood -- blue appears to represent anxiety or "negative stress," while yellow is more indicative of excitement, or "positive stress." I was also told that the Being needs to be worn in contact with the skin in order to obtain these so-called bio-parameters for up to 72 hours. The idea is that the longer you wear it, the better it's able to track the data.

It's difficult to assess the veracity of these claims, but Zensorium does say that they've consulted with both neuroscientists and psychologists when developing the product. If you're confident enough with what Zensorium is saying here though, you can go ahead and pre-order the product for $169. Or you can wait until March, when it's set to retail for $199.

In this article: being, ces2015, cesunveiled, unveiled, zensorium, ZensoriumBeing
All products recommended by Engadget are selected by our editorial team, independent of our parent company. Some of our stories include affiliate links. If you buy something through one of these links, we may earn an affiliate commission.