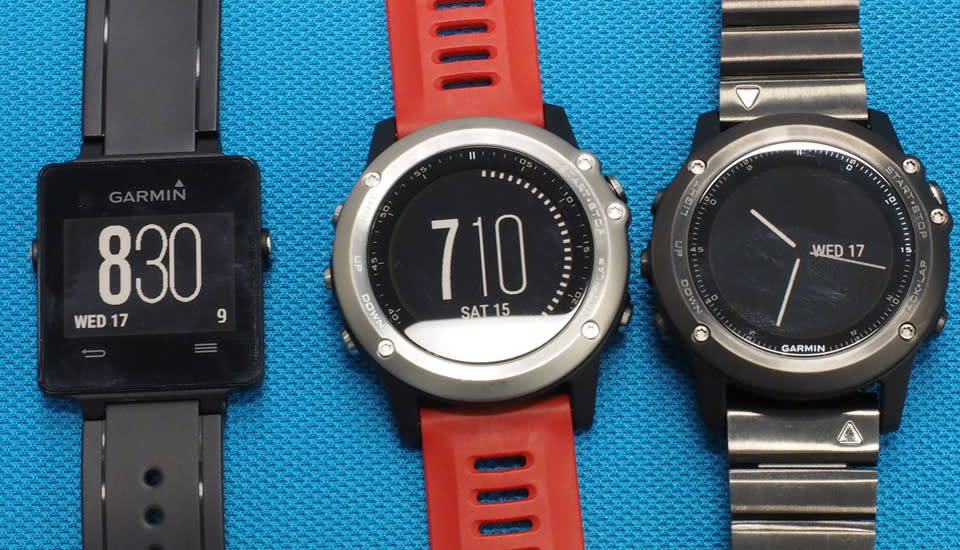 Credit where it's due: Garmin has managed to basically reinvent itself. Once the king of in-car GPS navigation, the company is now equally known for its sports watches and fitness trackers. Indeed, with the exception of a few low-end navigators no one cares about, Garmin is pretty much only showing wearable devices here at CES. In brief, this year's lineup runs the gamut, with prices starting at $250 and going all the way up to $600. Still, they all have this in common: They're equal parts smartwatch and fitness tracker. Normally I'd prefer to tell you about a company's flagship products first and then work my way down the list, but in Garmin's case the highest-end items are actually the nichiest. So, I'm gonna do something different and instead begin with the stuff you're most likely to actually buy. That would probably be the Vivoactive, Garmin's first-ever dedicated smartwatch. Until now, the company offered a fitness band that also showed some smartphone notifications. This is different, though. This is a proper watch, with a square, color touchscreen, and a newly launched app marketplace ("Connect IQ") for loading up your device with custom software. As is always the case with app stores, Garmin has the challenge of convincing third-party developers that these are devices worth writing apps for. Even without their help, though, Garmin has the basics down: The Vivoactive displays emails, texts, social media notifications, missed calls and calendar reminders.

Of course, this is a Garmin, don't forget, so naturally there's a GPS radio on board for tracking distance and speed in sports like running, biking and golf. Swimming too: The watch is waterproof up to 50 meters, as are all the products announced today. Last but not least, the battery life seems long compared to other smartwatches; Garmin rates it at up to three weeks, or 10 hours with GPS enabled. Look for it in April with a price of $250 (make that $300 if you want the heart rate monitor bundle). For the money, it comes standard with a silicone band in black or white, but there's also going to be an optional leather strap. Let's face it, though: For someone who spends a lot of time hiking and skiing, the Vivoactive is a wimpy little thing. If you're the rugged, outdoorsy type, you'd be better off with something from Garmin's Fenix series (pictured above), whose models have historically included an altimeter, barometer and compass. Now in its third iteration, the Fenix gets access to the same Connect IQ app store as the Vivoactive, effectively transforming it into a super-rugged smartwatch. Also with this generation, Garmin is adding a sapphire screen option, which should be even more scratch-resistant than the standard mineral glass lens. Look for it later this quarter starting at $500 (or $550 with an included heart rate monitor). The higher-end sapphire model, meanwhile, will go for $600. A serious piece of kit, for sure. But then again, some of you are serious snowboarders.

Finally, we reach the most obscure product of the bunch, a watch called the Epix, which is actually pretty similar to the Fenix 3, except it comes with preloaded maps. Like the Fenix, it's a rugged multi-sport device with an altimeter, barometer and compass. This, too, is intended for people who spend a lot of time outdoors -- hikers, hunters, rock climbers and what have you -- but in particular, these are people who might get lost in the wild if not for the maps on their wrist. In addition, there's not just GPS, but also GLONASS for faster, hopefully more accurate location tracking (the Fenix has this too, just without the built-in maps).

Also like the Fenix, the Epix has access to Garmin's Connect IQ app store, so you can use it as a smartwatch if you so choose. I imagine the capacitive touchscreen here isn't quite as resilient as the sapphire panel on the other model, but what you lose in durability you make up for in battery life. Garmin rates it for up to 50 hours in the battery-saving "UltraTrac" mode and up to 16 weeks in watch mode (versus six weeks for the Fenix 3). So, if you're more worried about getting stranded than you are cracking the watch in a wipeout, this might be a better choice. Expect it to hit shelves later this quarter, starting at $550.

In this article: ces, ces2015, Epix, Fenix 3, Fenix3, fitness, fitness tracker, FitnessTracker, Garmin, GarminEpix, GarminFenix3, hands-on, sports watch, SportsWatch, Vivoactive, watch, watches
All products recommended by Engadget are selected by our editorial team, independent of our parent company. Some of our stories include affiliate links. If you buy something through one of these links, we may earn an affiliate commission.