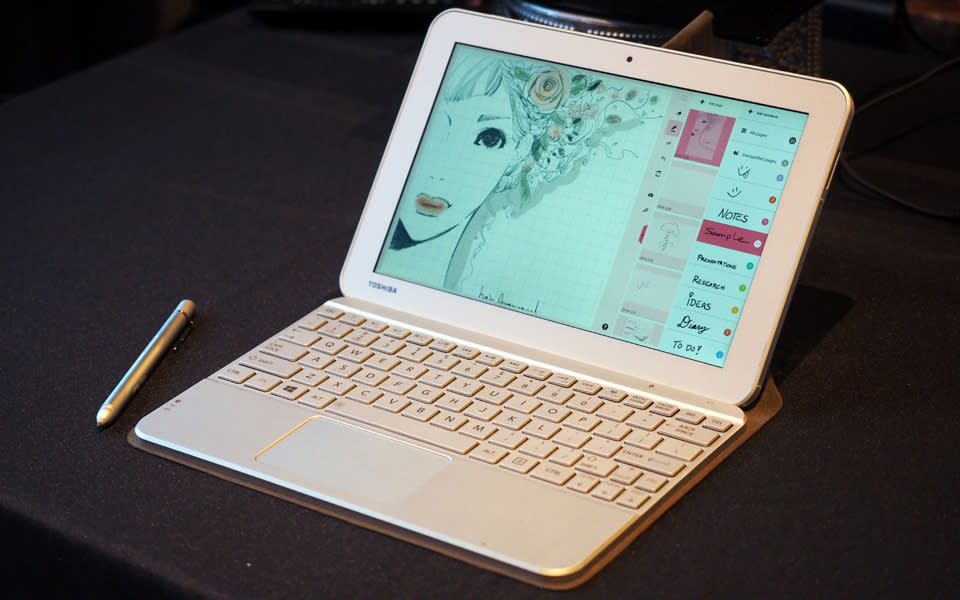 We've seen plenty of super-cheap Windows tablets, but until now, companies have invariably had to cut corners to get the prices so low. That's why Toshiba's new "Encore 2 Write" slates are interesting: Though they are indeed inexpensive, they allow for pressure-sensitive pen input, something you'll rarely see on a device in this price class. The two tablets come in 8- and 10-inch sizes, and will sell for $350 and $400 when they go on sale next week. For the money, you get a Wacom-made pen, with 2,048 levels of pressure sensitivity. To put that in perspective, Microsoft's own Surface 2 costs $449 and doesn't have a pen option. If we're going by the price and spec sheet alone, then, Toshiba's new tablets are a good deal.

In addition to including the pen itself, Toshiba also preinstalled three apps to help you take advantage of it. The first of these, TruCapture, scans newspaper clippings and other printed text using the tablet's 8-megapixel camera, and then automatically brightens and straightens them. In addition, the app uses character recognition, allowing you to search for keywords later, as well as export raw text to Toshiba's "TruNote" app. Speaking of the sort, TruNote does everything you'd expect a note-taking application to do: You can use it to doodle, paint and jot things down, as well as mark up existing documents. There are also right- and left-handed modes, which rearrange the menus depending on your orientation. A nice touch, that.

Finally, there's the third app, TruRecorder, which can recognize different voices in a conversation, and then break up the recording according to who's speaking, complete with color-coded labels for each person. From there, you can play back individual voices, or specific combinations of people. As journalists who frequently interview people -- or even groups of people -- we can immediately see where this feature would be useful. But even if you're a student or spend a lot of time in meetings, you might be able to appreciate it as well.

Other than the pen input (and those pen-specific apps), these are the same 8- and 10-inch Encore tablets that came out last year. The industrial design is the same (a basic plastic shell), and the specs are similar too. These include an Intel Atom processor, 1,280 x 800 screens, 2GB of RAM, 64GB of built-in storage, a one-year subscription to Office 365 and "Windows 8.1 with Bing" as an OS. For those not aware, Windows 8.1 with Bing is basically the same thing as Windows 8.1, which is to say, you can install a mix of Windows Store apps and traditional desktop apps on it. The only difference is that the default search engine is Bing, but even then, you have the option to changing it to Google, et cetera. Rounding out the list, both tablets are rated for 11 hours of battery life (or eight hours of video playback), and come outfitted with a microSD slot that supports cards up to 128GB. Look for them to arrive next week, on January 11th.

In this article: ces, ces2015, Encore, encore 2 write, encore2write, Toshiba, Toshiba Encore, ToshibaEncore, toshibaencore2, toshibaencore2write, Wacom, Windows 8.1 with Bing, windows tablet, windows tablets, WindowsTablet, WindowsTablets
All products recommended by Engadget are selected by our editorial team, independent of our parent company. Some of our stories include affiliate links. If you buy something through one of these links, we may earn an affiliate commission.