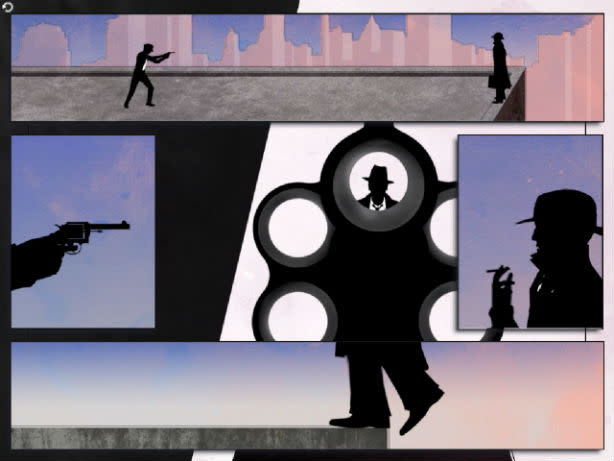 ATTENTION: The year 2014 has concluded its temporal self-destruct sequence. If you are among the escapees, please join us in salvaging and preserving the best games from the irradiated chrono-debris.
Framed

Framed is so elegant and simple that it needs not a single word to teach you how to play. If you understand the basic function of the panels in a comic book and are able to poke things with your finger, you will swiftly understand the basics of how to make things happen in this brilliant mobile game. Arrange the panels one way, and your spy makes a daring escape from the police; position them another way, and he emerges from the wrong door right into the hands of the law.

From the very first level, which uses just two panels to illustrate how switching the order of the comic can change the outcome of its events, Framed builds on its simplicity, adding more panels, directionality and timing to create more complex puzzles in its stylish spy-vs-spy thriller. Each page of the comic is a puzzle complete unto itself, making Framed perfectly designed for short bursts of inspiration, or restricted play time. It's one of those games that's so damn clever, you wish you'd thought it up yourself. It's cheating a bit to include two games in one entry, but I think of these games as a set; the second is certainly interesting on its own, but to fully appreciate its story you have to have played the first. Both games introduce unforgettable characters and an enticing drama chock full of murder most foul (and sometimes fowl), but include enough outrageousness to ever be too grim. Monokuma, the host of the gruesome events, wavers between menacing, pervy and downright goofy, as is to be expected of a homicidal mechanical plush bear. Though the courtroom gameplay doesn't quite hold up over the games' length - the minigames in Goodbye Despair are particularly aggravating by the end - the story is so inventive and well told that you'll happily brush aside your annoyance in favor of speeding to the end to find out what happens next. It won't be what you expect. Puhuhu! I'll leave the arguments about whether or not this is a "real" Final Fantasy game up to others and instead luxuriate in Lightning Returns' sumptuous visuals and soundtrack. The combat system certainly takes some getting used to, but once you understand its rhythms you'll delight in its fast pace and flexibility. The bosses of Lightning Returns are massive, undulating monsters that require patience and study to master, and even ordinary run-ins are challenging the entire time you play. I looked forward to each and every combat encounter because even when I was fighting lesser monsters, I enjoyed their fantastic colors and irreverent design, as well as trying out new strategies and ability-granting garbs. And, yes, I liked the story, too, even if it was eye-rollingly melodramatic in places. It raised interesting questions about humanity, faith, destiny, and just plain being ready for things to be done. Even without the philosophizing, the locations were interesting, the quests were fun, and you ended up with a chocobo fighting by your side. Not a bad way to greet the end of the world. Tales from the Borderlands

Its incomplete nature prevented Tales from the Borderlands from being eligible for our Game of the Year list, but make no mistake - it was one of the best gaming experiences that 2014 had to offer. Telltale's pretty much got the whole episodic narrative thing down cold at this point, but Tales offers something that Walking Dead and Wolf Among Us can't: a marvelous sense of humor. Tales is genuinely laugh-out-loud funny in places and uses its dueling storytellers to brilliant effect, giving us a pair of moderately reprehensible people who aren't overwhelmingly burdened with a need to tell the truth. As narrators, they're completely unreliable, but that's what makes them so much fun. Their quest is ... well, not noble, really, they're both just out for themselves, but you can't really hold it against them all that much. Also, Loader Bot. Always Loader Bot. Persona Q: Shadow of the Labyrinth

I have a stupefyingly bad sense of direction. It's so bad, it's practically a superpower. To make matters worse, I'm terrible at reading maps, so the prospect of having to draw my own navigational tools in Persona Q, the crossover of the Persona and Etrian Odyssey series, did not fill me with jubilation. It says much about Persona Q's ingenious dungeon design that I am now obsessed with perfect cartography, mapping each wall, switch, trap and door with color-coded, icon-marked precision.

The fighting in the handheld dungeon-crawler is an enjoyable grind, and returning to Persona's demon-collecting is always fun, but conquering the different floors of each dungeon is where the real triumph of Persona Q lies. Simply reaching the stairs down to the next floor feels like ultimate victory as I happily hack away at scores of monsters, creeping along, foot by perfectly-mapped foot. Sometimes, I want my RPG to provide a deep narrative with richly drawn characters and sometimes I just want to obsess over tiny details. Persona Q is a happy obsession.
[Images: Loveshack, Atlus, Telltale Games, Square Enix, NIS America]
Joystiq is highlighting its 10 favorite games of 2014 throughout the week. Keep reading for every writer's personal picks in Best of the Rest roundups.
In this article: 3ds, android, best-of-2014, best-of-the-rest-2014, danganronpa-2-goodbye-despair, danganronpa-trigger-happy-havoc, framed, ios, ipad, iphone, joystiq-best-of-2014, lightning returns final fantasy xiii, microsoft, mobile, nintendo, persona q, playstation, playstation-vita, ps3, recommended, tales from the borderlands, vita, xbox
All products recommended by Engadget are selected by our editorial team, independent of our parent company. Some of our stories include affiliate links. If you buy something through one of these links, we may earn an affiliate commission.