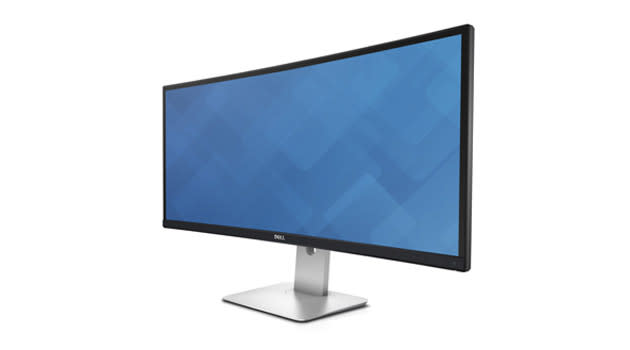 It's official: Curved monitors are now a thing. So far this week, HP has unveiled one and Samsung said it plans to have nine on sale by the end of the year, and now Dell is coming out with something similar. The UltraSharp 34 (aka the U3415W) was first teased last summer and is going on sale this week, making it not the first, but one of the first curved monitors to hit the market. For the money, it brings 3,440 x 1,440 screen resolution and a wide 21:9 aspect ratio -- pretty standard for curved displays like these, which aim to eliminate the need for a dual- or multi-monitor setup. Around the edges, you'll find HDMI and DisplayPorts, along with dual nine-watt speakers, a spec that appears to be aimed mostly at gamers. Look for it on January 8th, two days from now, for $1,200. That's a lofty price for a display, but then again, flagship monitors with keywords like "curved" and "WQHD" never come cheap.