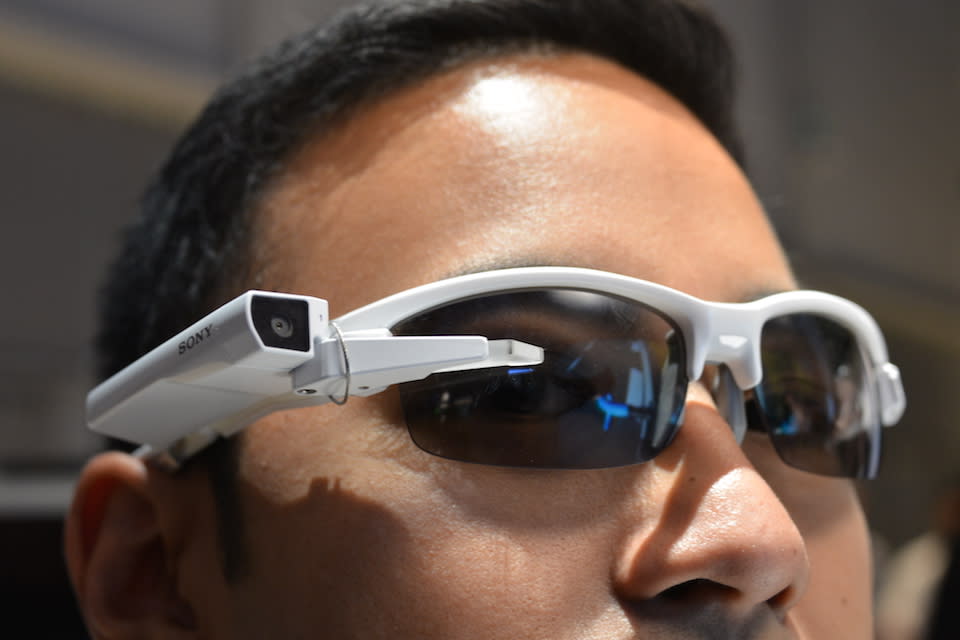 It's no secret that Sony's been working on a sort of Google Glass analog, but the fact that the company's also got a bolt-on display that can (ideally) turn any pair of glasses into a savvy wearable is nothing short of impressive. After Sony wrapped up this year's CES press conference, we got the chance to yank a pair out of some poor spokesperson's hands and strap them on for ourselves. Long story short: Sony just might have a winner on its hands. Here's the thing you have to remember: This isn't the first time Sony's tried to dangle a teensy display in front of your eye. Unlike the company's own SmartGlasses (which exist as a discrete set of frames), the Attach lives on as a separate unit that attaches to any pair of compatible glasses. At least during those early days post-launch, the selection of frames that'll play nice will be pretty limited as the physical connector on these prototype units is... unique to say the least. It's a wide, peculiarly shaped gap that the Attach fits into, and it just seems awfully unlikely that a Luxottica would ever embrace such a distinct style. A Sony spokesperson said, though, that the final model would support a whole host of mounting methods, including truly mundane solutions like adhesive.

Anyway, let's talk about wearing the thing! Just like Google Glass, a tiny prism sits in front of your right eye and it acts as what Sony calls an OLED microdisplay. Once you get used to it appearing and disappearing from view while your eyes focus on other things, the semi-persistent image is bright, vivid and crisp, even if it isn't immediately obvious how you're supposed to interact with what you see. Most of the demo scenarios Sony dreamed up involve sports in one way or another -- one visualized a path that wound through a series of Japanese mountains; while others highlighted the imaginary route of a golf ball as it hooked down toward the final green at Augusta. Sony's clearly gunning to imbue the thing with some sports savvy, but surely it wouldn't be that hard to broaden the Attach's skillset to cater to we, mostly immobile, bespectacled types. Still, the prototype frames seemed almost too light and insubstantial -- I wouldn't be surprised if they were 3D printed.

It's a shame that we don't know how much the SmartGlasses Attach will cost, nor when it'll make the leap from show-floor trinket to honest-to-goodness product. Sony's going to court mostly developers for at least a little while after launch though, so maybe we're looking at more than a smart pair of sport goggles after all.

In this article: ces, ces2015, glasses, hands-on, handson, SmartEyeglass, SmartEyeglassAttach, smartglasses, smartglassesattach, sony, SonySmartglasses, TL16SMRTGLS, wearable
All products recommended by Engadget are selected by our editorial team, independent of our parent company. Some of our stories include affiliate links. If you buy something through one of these links, we may earn an affiliate commission.