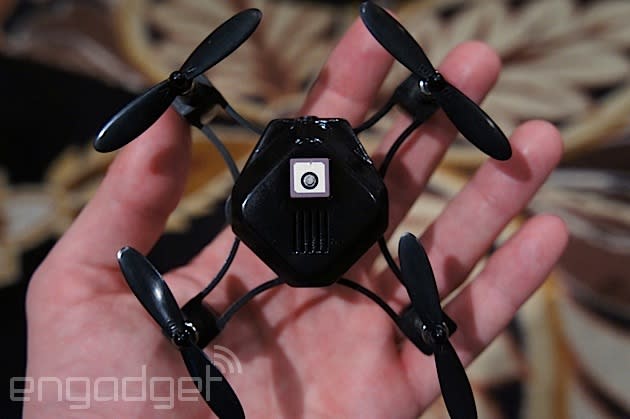 If there's one problem with using a drone for aerial photography, it's that the cost of buying one is prohibitively high. It's not likely that regular folks are going to splash out the better part of a thousand dollars on a drone and more for an action cam to accompany them just for noodling around. That's the issue that the Torquing Group is aiming to remedy with the Zano, a nano drone that wants to bring the price down to under $300, enabling many more people to take the plunge. Zano is the brainchild of Lantronix, a Welsh company that produces WiFi gear for various defense companies. It took to Kickstarter to pre-sell the drone, but was showing off a non-functional prototype here at CES. Making military WiFi modules means that the Zano has military-grade wireless connectivity and is capable of controlling its own flight to prevent novice pilots from crashing on their first attempt.

Rounding out the spec list is a replaceable battery, 5-megapixel camera that can shoot clips up to 60 fps and the ability to swarm, if that's important for you. When it launches in the summer, it'll be compatible with iOS and Android devices, with a Windows Phone app trailing along at some point afterward. Thankfully, the company has already smashed its crowdfunding goal, but there are still a few short hours remaining if you want to throw some money in the company's direction.

In this article: CES2015, hands-on, Lantronix, Nano Drone, Pepcom, Zano
All products recommended by Engadget are selected by our editorial team, independent of our parent company. Some of our stories include affiliate links. If you buy something through one of these links, we may earn an affiliate commission.