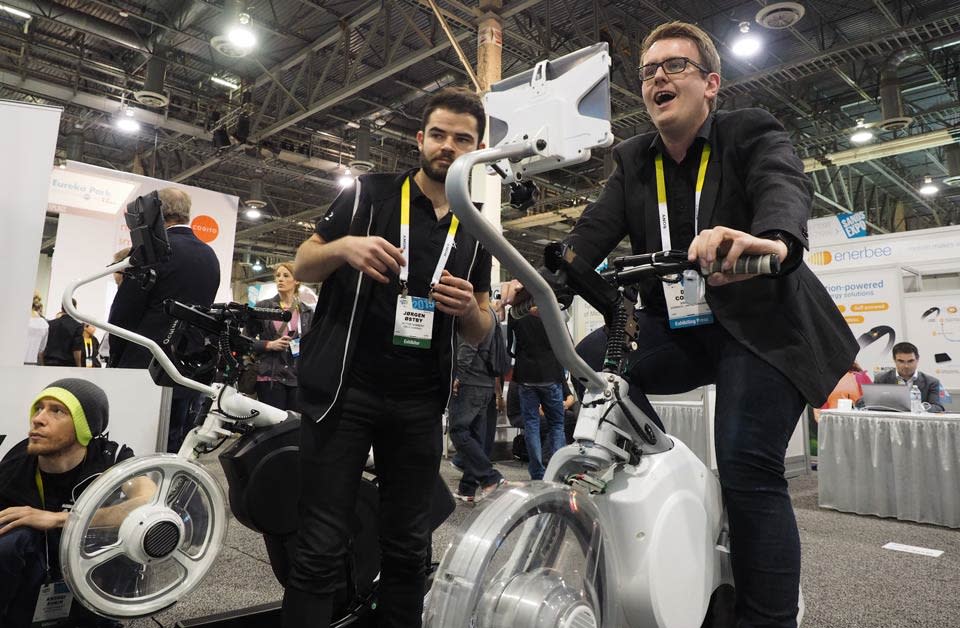 It takes you less than 30 seconds sitting on top of Activetainment's Ebove B\01 smart bike before you start wishing you could own one. Sure, there are plenty of static exercise bikes that let you follow a trail with the benefit of a tablet strapped on top. There are a lot fewer bikes that are set up on a gimbal that lifts up when you crest a hill and dips down when you hit the opposite side. When you factor in the fact that the bike has working gears and the effort you make represents the distance you travel, it's the closest thing we've seen to trail biking that doesn't involve getting muddy. But let's back up, because the Norwegian creators of the Ebove describe the product as a health and fitness product that also happens to be an interactive video game. Because the bike is attached to a single point and can move in several directions, you have to wrench the bike into each turn, which certainly gave me a great core workout. In fact, in just 500 seconds, I was sweating enough to have run several marathons, although that's probably more a comment on my own fitness than anything else.

Because the device uses virtual trails, not only do you have a choice of routes, but also the laws of physics aren't strictly adhered to. More adventurous users, therefore, can leap off cliffs and onto rickety wooden piers, loop-de-loop and generally do the sort of things that you can't in the real world. In the demo, I'm gormlessly staring into a massive HDTV, but ordinary users would normally use the tablet that's mounted above the handlebars. Thankfully, the company has also baked in Oculus Rift integration, so you can give yourself an even more immersive experience, although I'd wager that you might make yourself a bit dizzy given the bike's movement.

Unfortunately, we're still a ways away from Ebove being a real product, and the company's founders are planning to pitch this to fitness centers well before ordinary members of the public can get their hands upon it. Still, if the company can produce and sell these for just a few thousand dollars, we can imagine plenty of very rich action junkies getting one to live out their fantasies of jumping Springfield Gorge on their mountain bike.

In this article: Activetainment, Bike, CES, CES2015, Ebove, hands-on, Oculus Rift, video, Virtual
All products recommended by Engadget are selected by our editorial team, independent of our parent company. Some of our stories include affiliate links. If you buy something through one of these links, we may earn an affiliate commission.