Spotify now works on the Apple Watch, no phone required 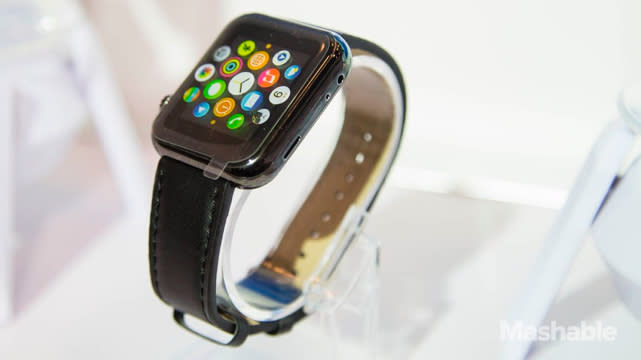 Apple's gadgets always get barely functional clones, but it's rare that a company actually beats Apple to the punch with a low-quality version of a device that isn't even out yet. It's rarer still that such a gadget doesn't initially show up overseas, but instead debuts right here in the U.S., and at the country's biggest electronics expo, no less. That's exactly what Mashable's Karissa Bell discovered in a low-traffic hall at CES this year -- it's an Apple Watch, only not really, and it's already for sale. For $27, cash only.

"The watch's screen only displays when it's turned on, and many of its icons are blatant ripoffs of Apple designs," Bell writes. "The pairing process took a few tries, but once connected to my iPhone 6, I was able to make phone calls and play music through the watch. It even vibrates when I get a call."

The seller is promoting at as simply "Smart Watch," but there's no denying that it's a blatant Apple Watch clone. Hyperdon, the company that created the watch, claims it can last a whopping 180 hours before needing to be recharged, though that particular claim hasn't been confirmed.

It actually pains me to say this, but for $27, a watch that forwards iOS notifications, plays music, and doesn't die within five minutes of putting it on your wrist is actually a surprisingly reasonable offering. Of course, decent build quality and any kind of support or updates are surely out of the question for that price point.

In this article: apple watch, ces, clone, mashable
All products recommended by Engadget are selected by our editorial team, independent of our parent company. Some of our stories include affiliate links. If you buy something through one of these links, we may earn an affiliate commission.