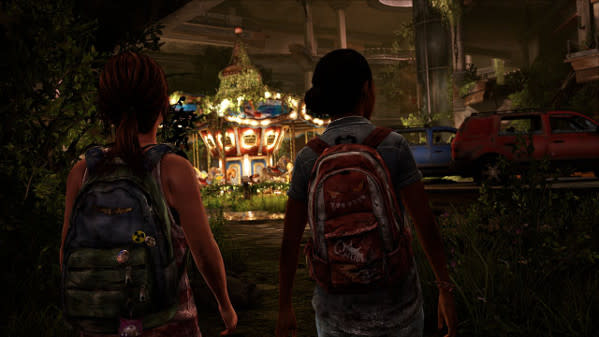 The Writers Guild of America has nominated Alien: Isolation, The Last of Us: Left Behind, Assassin's Creed: Unity and Assassin's Creed: Freedom Cry for the 2015 award recognizing outstanding achievement in video game writing. Winners will be announced during simultaneous ceremonies in Los Angeles and New York City on Saturday, February 14.

Note that to be nominated for an award from the Writers Guild of America, "credited videogame writers must have been or must have applied to become members of the WGA Videogame Writers Caucus at the time scripts were submitted," meaning the pool of eligible writers is limited. (Yes, the Guild spells "video game" as one word).

For reference, we had the following to say about the stories in Alien, Left Behind and Unity:

The Last of Us: Left Behind, Written by Neil Druckmann; Sony Computer Entertainment

Now in its eighth year, the WGA's Videogame Writing Award honors the best qualifying script from a videogame published in the previous year. To be eligible for WGA consideration, games must have been released between December 1, 2013 and November 30, 2014, and feature on-screen writing credit(s). Credited videogame writers must have been or must have applied to become members of the WGA Videogame Writers Caucus at the time scripts were submitted. Work that was not produced under WGA jurisdiction was also eligible for submission. Judging for the WGA Videogame Writing Award is conducted by panels comprised of Videogame Writers Caucus members and/or Writers Guild members active in videogame writing.

The Writers Guild Awards honor outstanding writing in film, television, new media, videogames, news, radio, promotional, and graphic animation categories. The awards will be presented jointly at simultaneous ceremonies on Saturday, February 14, 2015, in Los Angeles at the Hyatt Regency Century Plaza and in New York City at the Edison Ballroom.

For more information about the 2015 Writers Guild Awards, please visit www.wga.org or www.wgaeast.org.
[Image: SCEA]
In this article: 2015-writers-guild-awards, alien-isolation, assassins-creed-freedom-cry-standalone, assassins-creed-unity, microsoft, pc, playstation, ps3, ps4, the-last-of-us, writers-guild-awards, writers-guild-of-america, writing, xbox, xbox-one
All products recommended by Engadget are selected by our editorial team, independent of our parent company. Some of our stories include affiliate links. If you buy something through one of these links, we may earn an affiliate commission.