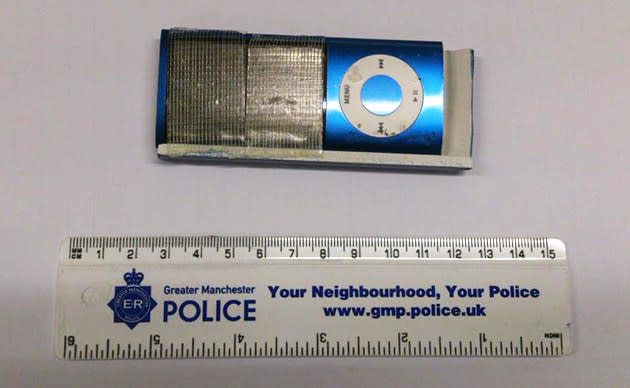 Now that phones come with large internal storage and microSD card slots, a lot of people have probably forgotten about their old iPod nanos. Some thieves from Gatley, Stockport, England have found a new use for theirs, though: with a little duct tape and not much else, they've transformed the device into part of a (poorly) MacGyvered ATM skimmer. According to the Greater Manchester Police, the thieves used the antiquated iPod to record videos of depositors entering their PIN numbers. It was paired with a plastic contraption attached to the card slot, which harvests cards as they're ejected for the perps to collect later on.

The cops didn't mention on their Twitter account (where they posted details and pics) whether anybody got affected. But as the skimmer was designed to collect the cards themselves and not just their details, we're hoping people did the sensible thing and called their banks right way. ATM skimmers are typically sophisticated, blending into the machine's facade so as to evade notice. Most can instantly steal data from a card's chip, and some are even equipped with a wireless system that can transmit data to a remote location. So, we can understand why the cops told The Telegraph that this is "not the best attempt [they] have seen," but hey, the world would be a better place if all MOs were this easy to detect.

In this article: apple, IpodNano, law
All products recommended by Engadget are selected by our editorial team, independent of our parent company. Some of our stories include affiliate links. If you buy something through one of these links, we may earn an affiliate commission.