TikTok is the latest platform to pull ISIS propaganda videos

Burned alive for using a smartphone 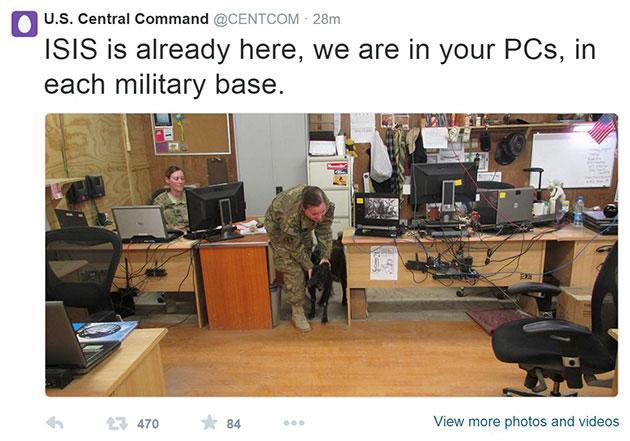 A group referring to itself as the CyberCaliphate and claiming ties to ISIS appears to have taken over social media accounts belonging to the United States Central Command. For the past hour or so, the group has been using CENTCOM's YouTube and Twitter accounts to share pro-ISIS videos and supposedly leaked documents, though Twitter has already suspended CENTCOM's account in a bid to keep things under control. While it's still unclear whether ISIS proper had a hand in orchestrating the breach, a defense official confirmed to NBC that the accounts were compromised and that the Defense Department is "taking appropriate measures to address the matter."

Meanwhile, as is de rigueur these days, the hackers have taken to Pastebin to issue and offer up a taste of information said to have been pulled from private military systems.

"We broke into your networks and personal devices and know everything about you," the statement reads. "You'll see no mercy infidels. ISIS is already here, we are in your PCs, in each military base. With Allah's permission we are in CENTCOM now." Fair warning: We haven't yet been able to confirm what's exactly in these dumps, so do your due diligence and protect yourself and your system if you decide to sift though things.

Still, the data posted on CENTCOM's Twitter account prior to its suspension was not the sensational, game-changing stuff one might expect -- among other things, there's a list of retired Army generals (complete with phone numbers) and "Korean scenarios" outlining North Korea's state of military readiness. ZDNET's Zach Whittaker has preliminarily explored the files and determined that some -- if not a significant percentage -- are materials that have already been publicly released. A Pentagon official speaking to the Wall Street Journal clearly agrees: They said that the information shared via Twitter was not highly classified.

This is a developing story, please refresh for updates.

In this article: isis, security, twitter, youtube
All products recommended by Engadget are selected by our editorial team, independent of our parent company. Some of our stories include affiliate links. If you buy something through one of these links, we may earn an affiliate commission.