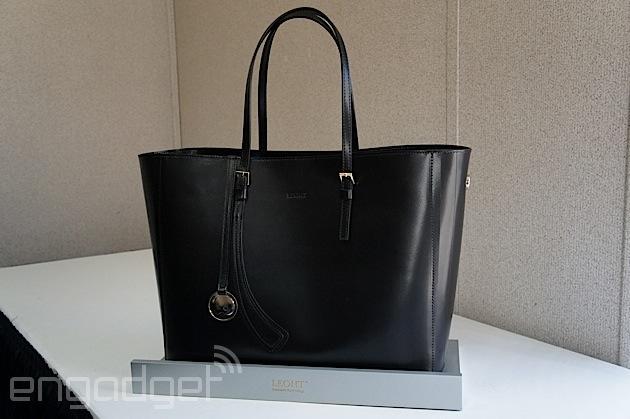 Leoht's "tech" handbag is one of those things you won't necessarily need, but may really (really) want. As you might have guessed, it's a purse for modern times. The bag's simple, black leather exterior is stylish, but it's what's on the inside that's interesting. The tote hides a built-in (6,000 or 10,000mAh) battery in the base for charging your gadgets on the fly, plus some interior lights to help you find whatever you're searching for faster. Oh, and a secret compartment for any extra-special cargo you may have.

A battery in a bag isn't exactly novel, but it is useful, and Leoht did add a few flourishes. For one, you charge the bag itself wirelessly via a custom Qi inductive charging plate (included in the price), which works with all the three styles in the range (which Leoht is calling the "Seed" collection). Should you need to replenish its power while away from home, there's a micro-USB port you can use to top things up the old-fashioned way.

The secret bottom compartment -- or "Alcove" -- that you can use to tuck away valuables like cash or a passport is perhaps a little more gimmicky. It's cool in theory, but one hopes you wouldn't leave your bag unattended while carrying such precious cargo anyway. There's also a small exterior light, which is more of an attention-grabbing detail than anything else. Unlike the interior lights, which are truly something to rejoice over.

Why? Because if you ever wasted several minutes of your life trying to find a pen because the interior of your bag has suddenly become a black hole, or find yourself aimlessly feeling around the bottom for your keys at night, you'll know how useful these will be. Basically, with this bag, those days are gone -- just click a button near the top of the purse and everything is illuminated by bright LEDs. The downfall of having such a souped-up handbag though is that all that tech makes it quite heavy. Completely empty, the tote version I tested weighed about three pounds, which sounds like a small number, but can start to feel large after resting on your shoulder for extended periods of time. And if you decide to cart around a laptop or fill your bag with personal items? It could make the bag a downright pain, especially given the thinness of its straps.

Leoht's co-founder and CEO Carnise McIntosh assured me they are addressing both of these things. It is, after all, a prototype. Once the interior tech is improved, it should drop the weight of the tote by about a pound, and McIntosh says straps with more cushion for your shoulders are in the works. The price of the Tote will be around $300-350, while the full collection of three (the other two styles being a cross-body satchel and a "Hobo" handbag), could cost you anywhere between $300 and $650 each (the company is still working that one out).

The handbags will be available for pre-order on Kickstarter early this spring and all going well, should be available in stores by fall.

In this article: battery, CES, ces2015, handbag, led, leoht, purse
All products recommended by Engadget are selected by our editorial team, independent of our parent company. Some of our stories include affiliate links. If you buy something through one of these links, we may earn an affiliate commission.