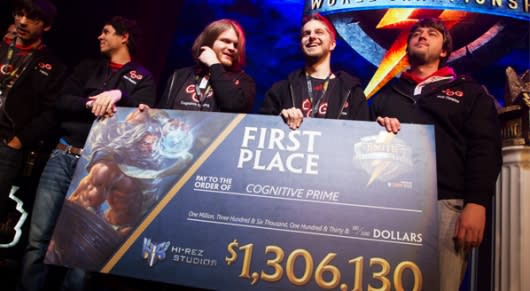 Tempted to proclaim yourself the best SMITE player in the world? Unless you are one of these five people, there is now demonstrable evidence that you are not on top. The first World Championship for SMITE is over, and the team known as Cognitive Prime has taken home the title and half of the $2.6 million prize pool. Worldwide viewers for the stream over the weekend came out to 78,000 people, which doesn't quite compare to the turnouts at better-known competitive gaming championships like League of Legends. But SMITE's prize pool was larger than the pools for any LoL tournament; in fact, it's the third largest e-sports prize pool ever, behind Dota 2's The International tourney's 2013 and 2014 pools.

Coinciding with tournament was the reveal of SMITE's newest god, Hou Yi, Defender of the Earth. He justifies this lofty title with a variety of ranged attacks, movement tricks, and a high resistance to critical hits. Check him out in action just past the break.

[Thanks to Sorenthaz for the tip!]

In this article: champion, champions, character, characters, f2p, free-to-play, hi-rez, hi-rez-studios, moba, multiplayer-online-battle-arena, news, news-items, Smite, tournament, tournaments, trophy, video, videos, world-champions, world-championship
All products recommended by Engadget are selected by our editorial team, independent of our parent company. Some of our stories include affiliate links. If you buy something through one of these links, we may earn an affiliate commission.