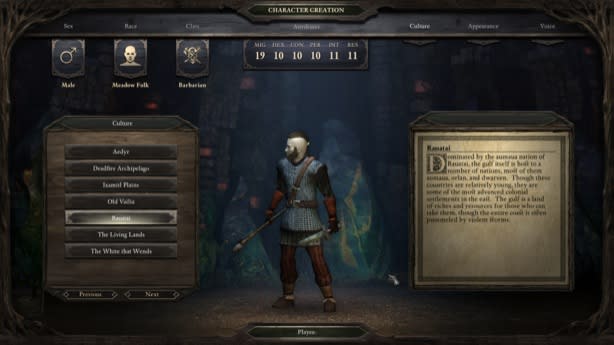 Obsidian RPG Pillars of Eternity will launch on March 26, the developer announced on its Kickstarter page. The game entered a backers-only beta phase in August, available in early access form to those that pledged at least $110 to its development. Pillars of Eternity is currently available for pre-purchase on Steam for PC, Mac and Linux, starting at $45.

The game earned $3.9 million on the crowdfunding service in October 2012, back when it was known as "Project Eternity." It was originally given a spring 2014 launch window, prior to its name change in December 2013. Pillars of Eternity received two more delays, the first in February 2014, when project lead Josh Sawyer said "virtually nothing good comes from [Obsidian] releasing a date before we're very confident in it." Paradox Interactive agreed to handle the marketing and distribution of the game one month later. Finally, the developer pushed Pillars of Eternity back to early 2015 this past October, noting that "since the very beginning of this project we promised our fans and ourselves that we would release this game only when we knew it would be absolutely ready for the best experience possible."
[Image: Obsidian Entertainment]
In this article: gog.com, kickstarter, linux, mac, obsidian, Obsidian-Entertainment, Paradox-Interactive, pc, pillars-of-eternity, project-eternity, release-date, rpg, steam
All products recommended by Engadget are selected by our editorial team, independent of our parent company. Some of our stories include affiliate links. If you buy something through one of these links, we may earn an affiliate commission.