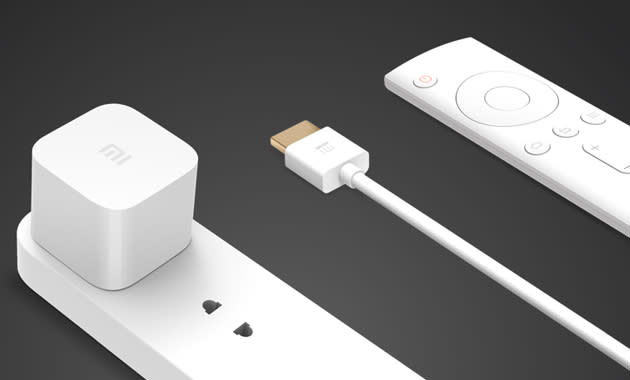 In addition to the phablet and headphones announced today, Xiaomi also threw in a little surprise. And by "little" we do mean literally, because this new Mi Box Mini is much smaller than the company's earlier Android streaming devices; it's so small that when it's plugged into the power socket, you'd easily mistake it as a USB phone charger.

Despite the reduced size, this Android 4.4.2-powered device still packs a 1.3GHz quad-Cortex-A7 MediaTek processor, along with 1GB of RAM, 4GB of flash storage, dual-band WiFi, Bluetooth 4.0 (for the remote control and other accessories) and support for DTS 2.0 plus Dolby Digital Plus. There's HDMI 1.4a for 1080p 3D video output, but unlike its larger, 4K-enabled sibling, the Mi Box Mini doesn't come with any USB port nor microSD slot, so you'll have to rely on the desktop remote installation software to sideload apps. Considering that folks outside China will miss out on the 1.4 million hours worth of content, the sideloading feature is a must for most of us here. But if you do reside in the area, you'll be able to order a Mi Box Mini for CN¥199 or about $30 on January 20th; and it'll likely be sold out in a matter of seconds.

In this article: android, china, mi box mini, miboxmini, miui, streaming, tv, xiaomi
All products recommended by Engadget are selected by our editorial team, independent of our parent company. Some of our stories include affiliate links. If you buy something through one of these links, we may earn an affiliate commission.