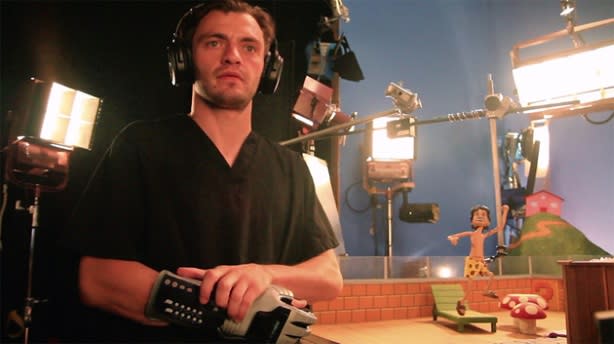 Next time someone tells you that Nintendo's Power Glove accessory was a flop, point them to Dillon Markey, an animator who works on projects like Cartoon Network's Robot Chicken. Markey has been using a modified Power Glove for more than a year now, using it to help him control the devices and software he needs to get the right shot.

But because making the Power Glove feature a Bluetooth keyboard just wasn't enough, Markey's modified version also sports a retractable set of tweezers and a sensor that causes it to speak when given a fist bump. (Unfortunately, the phrase it speaks is unsuitable for print here. But it rhymes with "ducking awesome.")

A short documentary by Ava Benjamin was posted to Vimeo earlier this week, and it shows Markey using and reminiscing about the iconic piece of wearable technology. "I see this and it's like the coolest thing in the world, it's like a cyborg arm," Markey says in the video, which you can watch after the break.

[Image: Ava Benjamin/Vimeo]
In this article: ava-benjamin, dillon-markey, nintendo, power-glove, robot-chicken, stop-motion
All products recommended by Engadget are selected by our editorial team, independent of our parent company. Some of our stories include affiliate links. If you buy something through one of these links, we may earn an affiliate commission.