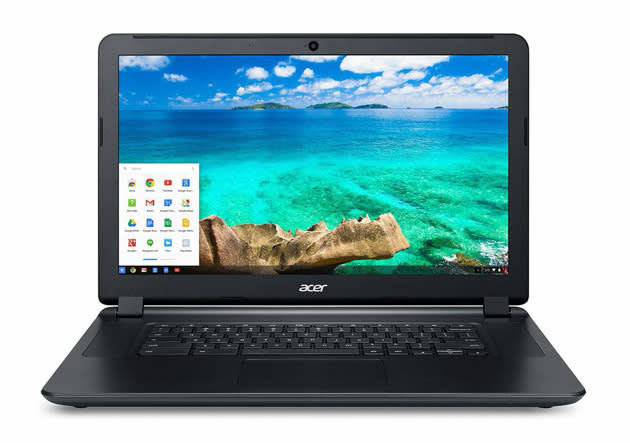 Chromebooks are a big deal for schools because they're cheap and relatively easy to lock down. However, not just any Chromebook will do -- ideally, you want a laptop that can survive bumps and drops from less-than-careful students. Acer thinks it can handle that unforgiving audience, so it's launching two educational Chromebooks built to take pupil-inflicted punishment, the 15.6-inch C910 (shown up top) and 11.6-inch C740 (below). Both have shells that withstand up to 132 pounds of force, corners that handle falls from up to 18 inches high, and reinforced hinges that won't easily snap. The C740 even gets specially extended hinges to make sure it won't flop or twist in high-stress situations, such as a kid's backpack.

They're respectable systems beyond those tougher exteriors, for that matter. Both Chromebooks have the option of Intel Broadwell-based Celeron or Core i3 processors, and either 2GB or 4GB of RAM. You're mostly paying based on the screen and storage. The C740 starts things off with a 1,366 x 768 display, a 16GB solid-state drive and a 9-hour battery at $260. Pay a little more for the $279 C910 and you'll get little more than the larger LCD and a slightly shorter 8-hour runtime, but there are more sophisticated variants with 1080p displays and 32GB of space. Both Chrome OS models will be available in February, or in time for schools starting their early planning for the next school year. And before you ask, the C720 isn't going away -- Acer tells us that the C740 is an education-specific model rather than a replacement. In this article: acer, broadwell, c740, c910, chromebook, chromeos, computer, education, laptop, pc, rugged, school, student
All products recommended by Engadget are selected by our editorial team, independent of our parent company. Some of our stories include affiliate links. If you buy something through one of these links, we may earn an affiliate commission.