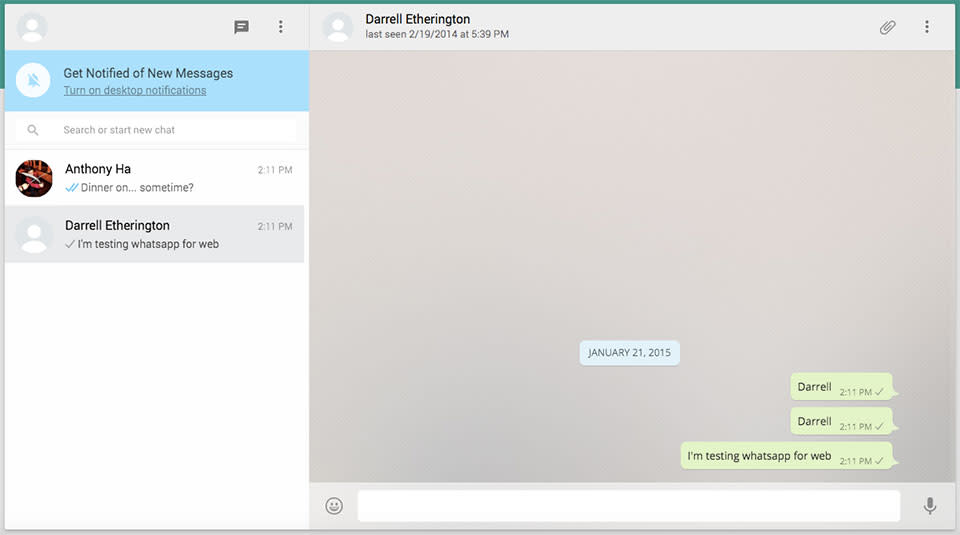 Well, those leaks were spot on. WhatsApp founder Jan Koum just announced (via Facebook, naturally) that the hugely popular messaging company has launched a web client that'll let users fire off messages from inside the desktop version of Google Chrome. As Koum points out, WhatsApp for the web is only an extension of the mobile apps you're already familiar with, meaning all of your lengthy conversations and exchanges still live primarily on your phone. Make no mistake: WhatsApp is still the epitome of a mobile-first company. Just to ram that point home, the (characteristically simple) setup process requires you to scan a QR code from the mobile app of your choosing. For now though, the client only plays nice with Android, BlackBerry, BlackBerry 10 and Windows Phone versions of the app -- Koum fingered "platform limitations" as the reason why iOS users can't join in on the fun.

Here's the thing, though: WhatsApp Web requires that you install and run the latest version of the mobile app on your phone, and it just might not be available for everyone yet. We just tried a fresh install of WhatsApp on an HTC One M8 (with a custom Lollipop ROM, alas) and it lacks the "Web" menu option that allows the app to scan the QR code necessary to forge the connection, though we've been able to confirm that the feature works just fine for others. That said, getting everything set up from a BlackBerry 10 was an utter cakewalk -- once you've scanned that code, you're dumped right into a sleek web interface where you can pick up where you left off with your friends. There's basically zero lag between pecking out a missive on a laptop and seeing it appear in a thread on your phone, either. We're going to keep playing around with the web client to see if we can't divine some more of its secrets, but here's what you need to know: It's simple, it's clever and it works. The rest of Facebook could learn a lesson or two from these folks.

In this article: app, facebook, messaging, mobile, mobilepostcross, software, whatsapp
All products recommended by Engadget are selected by our editorial team, independent of our parent company. Some of our stories include affiliate links. If you buy something through one of these links, we may earn an affiliate commission.