Mark and Jay Duplass are making podcasts for Spotify 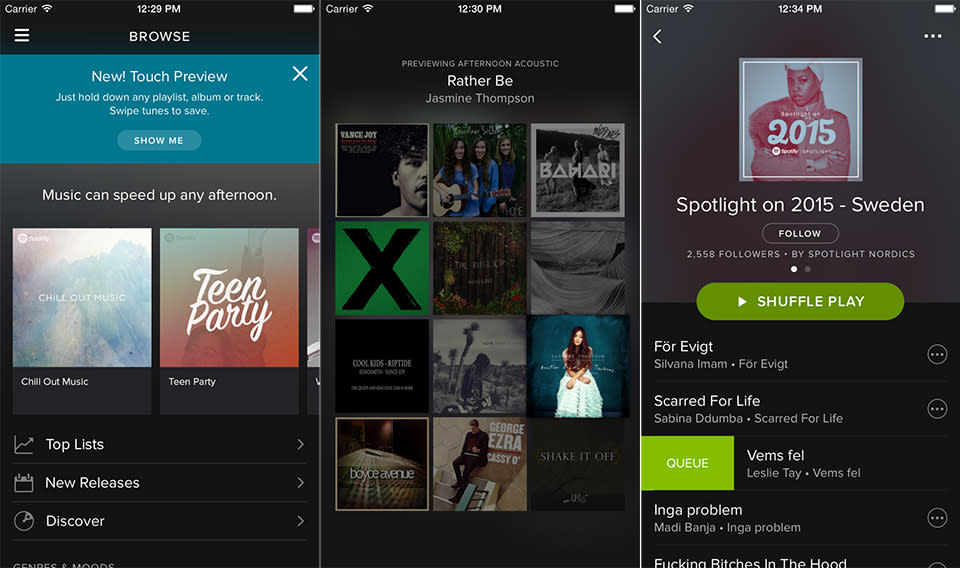 Spotify has a long history of spitting out new and interesting features from week-long hackathons. It tells its employees to forget their normal jobs, tackle a problem and solve it in a creative way. The "Top Tracks" feature that debuted last month was born of a hackathon and now, thanks to another week of blowing off of their regular responsibilities, the company has Touch Preview: a feature designed to aid in the lost art of music discovery. Touch Preview is is exactly what it sounds like -- touch and hold a song, playlist or album and you'll get a 30-second preview.

While the UI is certainly beautiful, Touch Preview is all about solving the shortcomings of visually browsing music. Truth is, album art is rarely a good indication of what something actually sounds like. Now, rather than having to go into a playlist or open an album and then select a song to listen to the first 30 seconds, you can just press and hold and jump straight to the "meat".

While Touch Preview is certainly helpful for quickly figuring out what exactly a playlist called "Posh Restroom" might sound like, it really comes into its own when combined with Top Tracks.

Pressing on a playlist will bring you to a grid of album art representing a selection of songs from it. As you move your finger from one tile to another, songs will play instantaneously giving you an idea of what to expect should you choose to listen to the entire thing. And weirdly, despite it being designed to compensate for the shortcomings of visual browsing, it's an intensely visual and tactile experience. Squares of album art arrange themselves in a grid and as you slide your finger around you hear the associated track, instantaneously creating a connection between the visual and the audible.

While Touch Preview is certainly helpful for quickly figuring out what exactly a playlist called "Posh Restroom" might sound like, it really comes into its own when combined with Top Tracks. You can browse through the top songs in your network and hold on a title to hear a preview. Drag your finger to the bottom of the screen and the list will start scrolling, playing each song as it becomes highlighted by your touch. Should you stumble across something that you like, just move your finger back up and you can swipe right to add it to your queue, or left to add it to your library. It's all pretty simple. And, you can even preview tracks while listening to something else. When you're done, just lift your finger off the screen and Spotify will pick up right where you left off in the song playing. It's all impressively seamless.

Touch Preview is coming to the iPhone app next week, with Android, tablets and the desktop to follow shortly there after. Eventually it'll become a global feature of the platform -- not bad for something that started as a proof of concept, whipped up in a week by a couple of employees. A few months later, and Spotify has a seriously useful feature for quickly checking out new music.

In this article: spotify, touch preview
All products recommended by Engadget are selected by our editorial team, independent of our parent company. Some of our stories include affiliate links. If you buy something through one of these links, we may earn an affiliate commission.