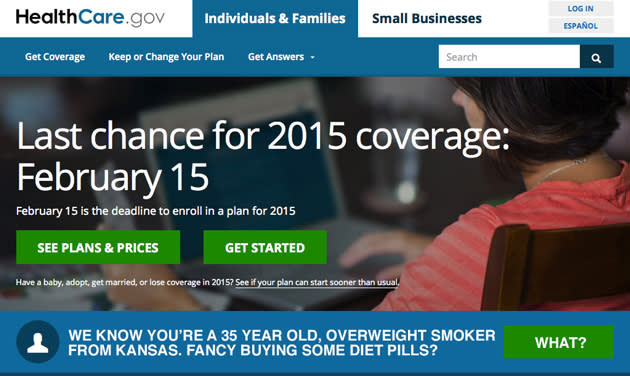 A few days ago an Associated Press report revealed that the US Government's affordable care portal Healthcare.gov was passing detailed information on to third parties. Now the AP tests reveal those links have been scaled back. Previously, the Eelectronic Freedom Foundation discovered that the site was passing on details like age, pregnancy status, smoking status and more via the URL, which would bypass even protections like enabling Do Not Track in your browser. The data that embedded services like DoubleClick, ChartBeat, Google or Twitter received was apparently anonymous and supposedly barred from use for business interests, but it theoretically could be matched up with other information to identify and target users with ads. The Obama Administration responded to the initial complaints by saying the data was intended for use to improve the website itself, but so far hasn't commented on the changes. For concerned users, the EFF recommends using a tool like its Privacy Badger to block websites from sending your personal information on to third parties.

In this article: advertising, DoNotTrack, doubleclick, EFF, healthcare, healthcare.gov, privacy
All products recommended by Engadget are selected by our editorial team, independent of our parent company. Some of our stories include affiliate links. If you buy something through one of these links, we may earn an affiliate commission.