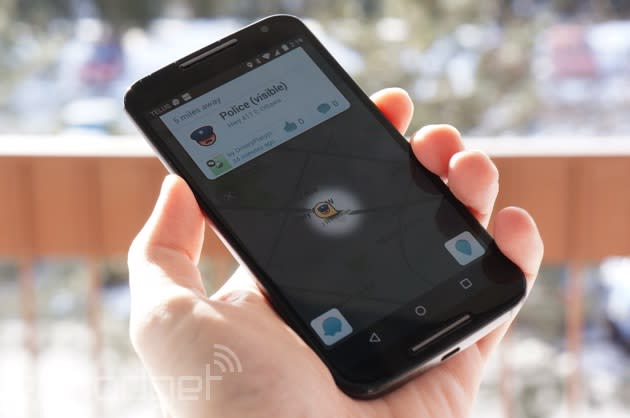 You may use Google's Waze app primarily to avoid traffic jams and watch out for speed cameras, but some American police see it as a threat -- and they want Google to do something about it. Officers speaking to the Associated Press believe that Waze's police finding feature, which is mainly meant to warn about speed traps, makes it too easy for would-be cop killers to find targets. These critics hope to muster support from law enforcement groups and push Google into disabling the feature so that it's not relatively trivial to "stalk" uniformed people from a phone.

The Waze team says only that it's concerned about police safety and shares information with departments worldwide. However, there's a good chance that Google won't have much to worry about, at least not in the short term. The app is based on crowdsourced data, and usually shows only those officers that drivers see parked on the roadside or otherwise making a very public display. It's hard to argue that everyday Americans aren't allowed to tell each other about cops that are in plain sight.

There are also questions about effectiveness. Waze's data doesn't represent an authoritative map of law enforcement activity, and there's no certainty that removing info would do anything to keep cops safe. In the case of the December shooting of two New York City officers, the killer tossed his cellphone two miles before he reached the scene of the crime -- censoring Waze won't stop people determined to attack any police they see.

In this article: CivilLiberties, crowdsourcing, google, lawenforcement, location, location-based, mobilepostcross, navigation, police, smartphone, traffic, waze
All products recommended by Engadget are selected by our editorial team, independent of our parent company. Some of our stories include affiliate links. If you buy something through one of these links, we may earn an affiliate commission.