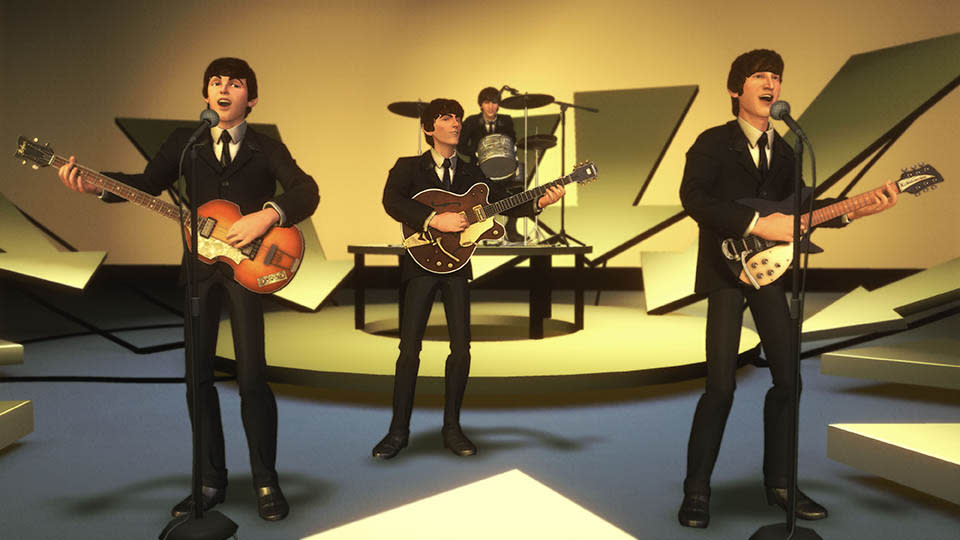 After several years on hiatus, an official announcement and the shockingly rapid decline of the music game market, Rock Band suddenly leapt back to life this month. Harmonix Music Systems -- the studio responsible for the music game craze, and the studio that created Guitar Hero, Rock Band and Dance Central -- announced new tracks heading to the Rock Band online store, which works with both Rock Band 3 and Rock Band Blitz. Why in the world is Harmonix releasing new tracks as paid, downloadable content for games that only exist on previous generation consoles? The official word is full of public relations obfuscation:

"We had an exciting opportunity to add new content to the already-massive Rock Band library with a song from Arctic Monkeys – a band that's never been in a Rock Band title before! – as well as new music from fan favorites Avenged Sevenfold and Foo Fighters. We couldn't pass it up. Also, we wanted to see if we could still do it. Turns out we can. It's sort of like riding a bike."

Great. That out of the way, what's really happening? Companies don't just casually release new content for years old games. That's not a thing that happens. I'd call it "testing the waters."

First and foremost, here's an interesting, not exactly surprising fact: "Hundreds of thousands" of people are still playing Rock Band every month. That's what a Harmonix rep told me, and it refers to folks playing online on "all platforms where DLC is available" (there's no way of measuring how many folks are playing offline, but let's wager that it's not a lot).

For those of you wondering who's still holding onto all those plastic instruments, the answer is "a surprisingly large group of people."

As for the rest of us, well, my house is purged of all the fake guitars, wireless microphones and plastic drum kits that accumulated across the Guitar Hero/Rock Band years. The same goes for most of my friends, and I doubt you're much different. Beyond the burnout that comes with releasing several junky, obvious cash-in games -- Activision flooded the market with constant variations on the Guitar Hero franchise -- many of us didn't want to fill closets/basements/dorm rooms/etc. with clunky gaming peripherals. Harmonix is actually trying to determine how you feel about those peripherals in a survey sent out via Twitter. More importantly, not only is Harmonix trying to determine if you still own old peripherals -- but also the company is asking very specific questions about which aspects of a Rock Band game (local multiplayer? a robust on-disc song library? etc.) are most important to you. It's also asking which current-gen game consoles you own.

Smells an awful lot like Harmonix is pretty seriously considering a rebirth of its biggest-ever franchise -- the franchise that both helped popularize music games and managed to get more than one Beatle onstage during a video game press conference.

It certainly doesn't hurt that the company is being asked about Rock Band all the time. When Forbes' Jason Evangelho asked about "Rock Band 4" back in October 2014 (a theoretical sequel to Rock Band 3), here's what Harmonix publicist Nick Chester said:

"We love Rock Band, it's in the company's DNA. We own the IP. And when the time's right we will absolutely come back to it. There's a whole bunch of factors to take into consideration before jumping in that pool again, but there's a desire for it, absolutely."

So, given that, and Harmonix CEO Alex Rigopulos outright stating that Rock Band would return at some point this console generation, the question of Rock Band's triumphant return isn't a question of if, but of when.

In this article: harmonix, harmonixmusicsystems, hdpostcross, microsoft, nintendo, playstation4, ps4, rockband, rockbandbeatles, sony, wiiu, xboxone
All products recommended by Engadget are selected by our editorial team, independent of our parent company. Some of our stories include affiliate links. If you buy something through one of these links, we may earn an affiliate commission.