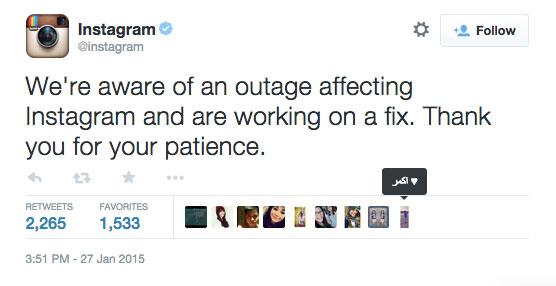 Snowmageddon might not be all that fun those experiencing it on the East Coast, but it could well be affecting the rest of us too. Starting around 1am ET, Facebook and Instagram were both inaccessible, as well as apps that require FB credentials. Tinder, for exmaple, also went down in the process -- globally. (We saw problems accessing servers across the US, Europe and Asia.) We've also seen Hipchat and, er, AIM also knocked offline at the same time. Snow in the servers? Or maybe it was a DDoS attack? We don't know just yet. Facebook and Instagram have just come back after an hour. Interestingly, as TechCrunch noted, Facebook's other app, WhatsApp went strong through out.

Update: Hacker team Lizard Squad took to Twitter to claim responsibility for the outage. Services are currently restored, but we're reaching out to Facebook to see what the official word is.

Update 2: Facebook and Instagram have denied that Lizard Squad or anybody else was responsible for the outage, saying it occurred because of "a change that affected our configuration systems." Its full statement is below:

This was not the result of a third-party attack but instead occurred after we introduced a change that affected our configuration systems," the Facebook statement said. "Both services are back to 100 percent for everyone.

In this article: aim, facebook, hipchat, instagram, offline, tinder, whatsapp
All products recommended by Engadget are selected by our editorial team, independent of our parent company. Some of our stories include affiliate links. If you buy something through one of these links, we may earn an affiliate commission.