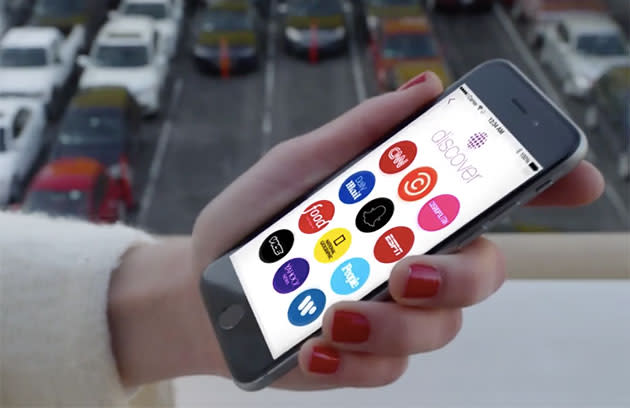 It's been a long time in the making, but Snapchat's new Discover feature is ready to go... and so is the app's transformation from a pure messaging service into a full-blown media destination. Once the app update is in place, a quick tap on a circle icon that lives in the top right corner of the screen takes you away from your inbox and plops in front of a curated selection of stories from media partners like CNN, Yahoo, Vice, ESPN and even Snapchat's own fledgling editorial team.

Like those snaps you're scribbled all over and sent, these stories too will disappear into the void, just not as quickly. They're delivered as part of what Snapchat calls "editions" -- bundles of stories crafted by deep-pocketed content partners -- that disappear after 24 hours. Naturally, Snapchat's ideal for pushing videos around, but this is all longer fare that you can skipping through by thumbing the tracking bar at the top of the screen. You'll also see a handful of actual articles peppering those editions too, laden with plenty of photos to keep the sort of Snapchat-encouraged micro-scale attention spans from getting too frazzled.

If none of that sounds particularly Snapchatty to you, well, you're not alone on that train of thought. What began as a short-lived way to share life's ridiculous moments with your cadre of young friends has ballooned into a messaging juggernaut helmed by a 22 year old who felt no (or very few) qualms about batting down multi-billion dollar acquisition offers from Facebook. In doing so, Snapchat also found itself in the unenviable position of, you know, trying to make money despite an insane amount of hype and very little to show for its past efforts. That makes Discover the startup's most pronounced attempt at a money grab yet -- reports published prior to the feature's launch claimed that Snapchat would take a (sadly undefined) chunk of ad revenue before passing the rest along its media partners. It's worth noting though that ads are conspicuously absent from the mix so far, save for the occasional sponsorship splash screen making an appearance.

Now the question is whether people, regular people, actually ever feel need to explore the newer side of Snapchat. Discover strays juuuuust far enough from the app's core formula to consign itself to a near-future of a weird looks, but the broad swath of publishers flocking to the app means there's a little something for everyone.

In this article: app, discover, messaging, mobile, mobilepostcross, news, snapchat, startup
All products recommended by Engadget are selected by our editorial team, independent of our parent company. Some of our stories include affiliate links. If you buy something through one of these links, we may earn an affiliate commission.