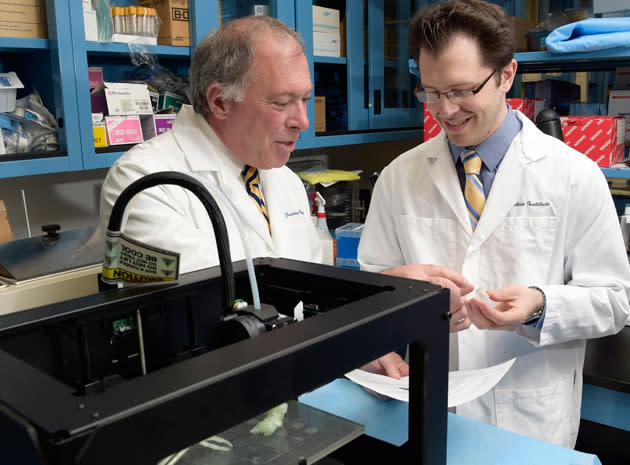 Believe it or not, scientists aren't yet finished discovering new ways to 3D print body parts. A team at the Feinstein Institute for Medical Research has developed a 3D printing technique that lets them produce cartilage for repairing damaged tracheas, better known to you and I as windpipes. They use an off-the-shelf 3D printer (in this case, a MakerBot Replicator 2X Experimental) to create a scaffold for the cartilage out of the same PLA filament you'd use for everyday 3D printing projects. After that, they cover the scaffold in a mix of chondrocytes (healthy cartilage cells) and collagen, 'baking' it in a custom bioreactor to make sure the cells grow properly.

The new approach is just a proof of concept right now, and researchers estimate that it could take up to five years before it's helping to repair airways in humans. If it works as promised, though, it could do a lot for fixing not just tracheas, but other body parts. Instead of relying on either slow conventional reconstruction methods or expensive biological printers, you could use relatively cheap hardware to get replacements within hours. That, in turn, would both lower medical costs and let patients resume their lives that much sooner.

In this article: 3dprinter, 3dprinting, cartilage, feinsteininstitute, feinsteininstituteformedicalresearch, health, makerbot, medicine, replicator2x, science, trachea, windpipe
All products recommended by Engadget are selected by our editorial team, independent of our parent company. Some of our stories include affiliate links. If you buy something through one of these links, we may earn an affiliate commission.